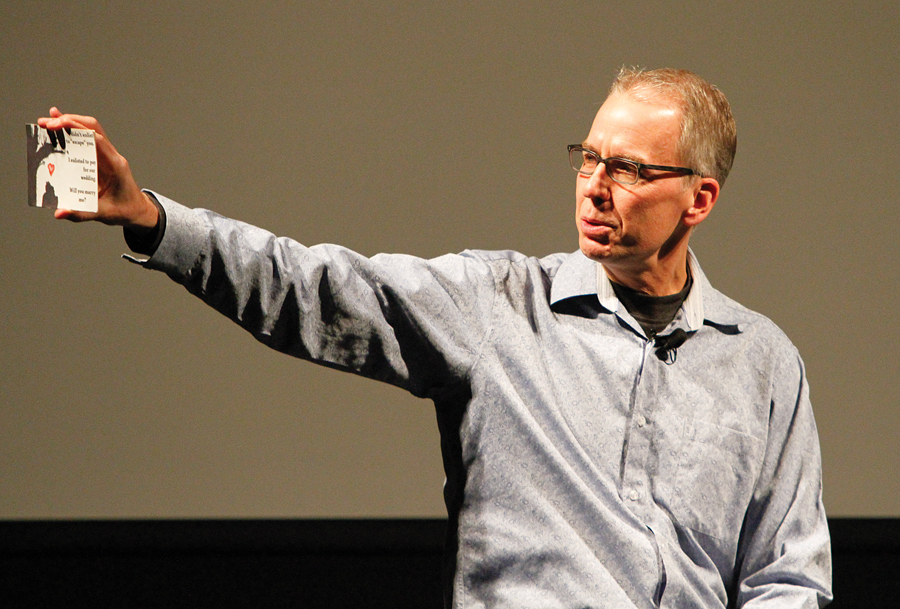 As it inched toward 7 p.m., the audience was getting restless, eagerly anticipating Frank Warren’s arrival. Warren’s PostSecret creation, which originated 10 years ago through the act of handing out 3,000 self-addressed postcards on the streets of Washington D.C, has become a worldwide phenomenon.

“Frank and PostSecret are centered around talking about the topics that are super touchy or taboo. He’s been so successful with these topics that we tend to struggle to bring to our peers. It’s difficult for people to talk about certain things openly. And we’re thankful to have someone like him agree to do a free event for us,” psychology major and president of the mental health advocacy group Active Minds Heather Rera said.

Last Thursday, “The Most Trusted Stranger in America” came to Towson to approach the stigma surrounding mental illness, as well as present his newest book “The World of PostSecret.” In a collaborative effort, Theta Chi, Pi Lambda Phi, the counseling center and Active Minds helped to organize the event in an effort to both heal and vocalize the gravity of mental ailments.

“This is a chance for people to be heard in instances where they normally wouldn’t. No one should feel alone; most people share some of the same secrets. Being able to break the silence about mental illness is really powerful,” Human Services major and Special Events Chairman for Theta Chi Nick Mercer said.

As the event began, the video for “Dirty Little Secret” by the All American Rejects began to play on the projection screen. Throughout the music video, a fraction of Frank Warren’s postcard collection can be seen in the background behind the band. To this day, Warren is still amazed at this, and other examples of the kind of notoriety that PostSecret has received.

“Well, when I started it, I knew it would be something very special and precious for me but, I had no idea that over a half billion people would visit the web to see something that I’ve created,” Warren said. “For me it feels very noble to find a special way to give unheard voices a way to tell their untold stories. I’m thrilled about it.”

Warren describes PostSecret as an alternative way for people to share their secrets and troubles with one another. He said that what could begin as sharing a secret on a postcard can extend to the ability to share that secret with parents, a spouse or a counselor.

“My hope is that, when you put it on a postcard and send it to a stranger, you’re kind of taking a first step in what can be a longer journey in sharing that secret in a way that is appropriate for you,” Warren said. “At PostSecret events, people hear others tell their secrets and they think, ‘Maybe my secret isn’t so different after all. Maybe it’s not really a wall, maybe it’s a bridge.’”

Sheila Graham, advisor for Active Minds and assistant director for outreach and diversity at the counseling center, is a supporter of Warren’s decade long movement and believes that properly educating the masses on the struggles of mental illness is the antidote that will raise awareness.

“I think one of the things that is most important to me as a counselor is knowing that people often carry a lot of shame and feeling as if they are the only one who experiences those. I think for people to know that many people struggle and many may share the same struggles, is very empowering and helpful,” Graham said.

At the end of Warren’s presentation, people formed a line at the mic set up in the back of the room to confess their secrets.

While some were lighthearted, others were emotional and even profound, which Warren said is an accurate reflection of the types of PostSecret cards he reads on a daily basis.

“I get a lot of secrets about peeing in the shower, that one is common. The most common secret I get is the search for intimacy, I get this kind of secret dozens of different ways every week,” Warren said. “I think in a lot of ways, secrets are the currency of intimacy and PostSecret is just a poor substitute until a person can find that life partner that you can really be your full self with.”

Warren reiterated the importance of communication and how disclosing a secret will not only make you feel at ease but could potentially influence whomever your telling as well.

“Since I’ve been doing this, it really makes me look carefully at my own behavior. Sometimes when you tell someone else a secret it can remind you to be compassionate and not a hypocrite,” Warren said.

In the spirit of confiding, Warren agreed to tell a few secrets of his own.

“I was never that person growing up who people would tell their secrets to. What I do now, this is a real privilege,” Warren said. “When I was in college I felt very lonely and without direction. For me, I visit college campuses and try to share these stories of hope and inspiration. I want to convey the idea that the feelings of loneliness and isolation are only an illusion; that we are all connected through our stories and our experiences.”