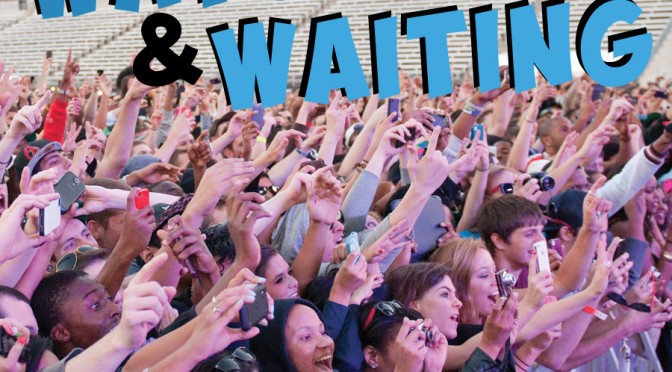 For the past few weeks, Towson students have been flooding social media with the same question, “Who’s playing Tigerfest this year?”

While that question remains unanswered for the time being, the process of finding an artist is the same this year as it has been in the past.

Each year, the Campus Activities Board starts their search with the results of the annual Tigerfest survey.

In 2012, 1,446 students responded to CAB’s annual Tigerfest survey. That year, the electronic dance music and rap duo LMFAO was the No. 1 requested.

While Kid Cudi eventually performed at that year’s festival, he ranked just 16th among the most requested artists, and was third among the artists within CAB’s budget.

Some of the artists who were toward the top of the list that year, such as Drake, Mac Miller, Lil’ Wayne and J. Cole were either too expensive or were not available on the date of Tigerfest.

When looking for a Tigerfest artist, Sam Silverman, the CAB director in 2012, said that there are a number of reasons why an artist may be unable to perform, even if there’s enough student interest and they are within CAB’s budget.

“Some artists don’t want to play colleges,” Silverman said. “Some artists, if they’re routing a tour they could be in California the day before, so it just doesn’t work. Or they’re not available. Interest, availability and routing are the three main factors.”

That year, CAB had a total budget of $150,000 for the headlining and opening artists.

There were a total of 32 top write-in artists that were voted on by students for the 2012 survey. Of those 32, there were nine artists within CAB’s budget, including Wiz Khalifa, who was later slated to perform in 2013, Kid Cudi, Ke$ha, Skrillex, All Time Low, Childish Gambino, Trey Songz and Avicii.

“After the survey results, you check availabilities and narrow it down internally to who we want to bid on,” Chad Nazworth, the CAB director in 2013, said. “We only bid on one headliner at a time, so while there’s a bid out you can’t bid on anyone else. Each bid lasts for about two weeks, so there’s an expectation that we put on it so [the artist doesn’t wait on the bid]. Sometimes we just get a bad vibe from them and retract the bid. … We try to send out bids before February starts.”

Current CAB Director Emily Walsh said that this year they began sending out bids in November. Drake was the top response for this year’s Tigerfest survey, but was out of CAB’s price range. Only 1,200 students answered the survey this year.

Silverman said that with the survey, CAB trusts students to give an accurate representation of what’s popular at the time. Even if an artist in the rap genre performed at the festival three years in a row, Silverman said they wouldn’t change genres unless the student body’s preferences changed first.

“We think about it, but honestly we want who’s hot. If you want to switch it up and say, ‘We want country,’ but there’s not a country artist that’s popular then it’s not worth it,” she said. “The students want, for the most part, a big name and you want to get that big name no matter what.”

According to Walsh, this year the most requested genre was hip-hop, with 39 percent of students requesting that. The two next most popular genres were pop and electronic dance music.

In 2012, 25 percent of respondents to the Tigerfest survey said they wanted a pop artist, the most popular answer. The next closest was hip-hop with 21 percent.

In addition to genre, Silverman said CAB also takes into account how much students would be willing to pay for a ticket.

“If students only want to pay $10 for Tigerfest, we’re obviously not going to get as big of an artist,” she said.

When reaching out to artists, CAB works with a booking agent who acts as a communication bridge between the University and the artist. That agent reaches out to the artist’s booking agent, who then confirms the date and price with the artist.

Sometimes, that communication process can take too long. In 2011, CAB was expecting to have Nicki Minaj perform for the event. Her booking agent told CAB that she was interested, but the show was never confirmed. Eventually Minaj dropped out, according to Silverman, leaving CAB with just a few weeks to quickly find an artist.

“Normally, you give your bid an expiration date and say that the artist needs to say yes or no by a date, but we just kept extending that date,” Silverman said. “It just ultimately didn’t work out. We were devastated. At that point, when you go back to that list, those artists take other dates.”

After Minaj dropped off, CAB had to rush to sign artists before tickets went on sale. Eventually, Reel Big Fish, Far East Movement and Brand New were all signed to play, but the concert was cut short by a thunderstorm.

Silverman, Nazworth and Walsh all said they learned from that experience, and have started to plan Tigerfest even further in advance.

“We have had artists that we were really set on, and then they can pull out on us as late as February,” Walsh said. “I mean I am not saying that’s still not the case this year, but we have had situations where we put out an artist, we are all really excited and we let the administration know and we start setting up our reveal … and suddenly something happened and they can’t come.”

This is one of the reasons that CAB makes use of a middleman. Walsh said that staying in touch with, and receiving feedback from potential artists is an important step in avoiding the kind of conflict that Towson experienced in 2011 with Minaj.

“A lot of it is communication,” Walsh said. “We do have our middle agent and it’s great that we work with him because he does a lot of sort of keeping an eye out and seeing what looks good and kind of has his ear to the ground in figuring out what is going on.”

– Carley Milligan contributed to this article