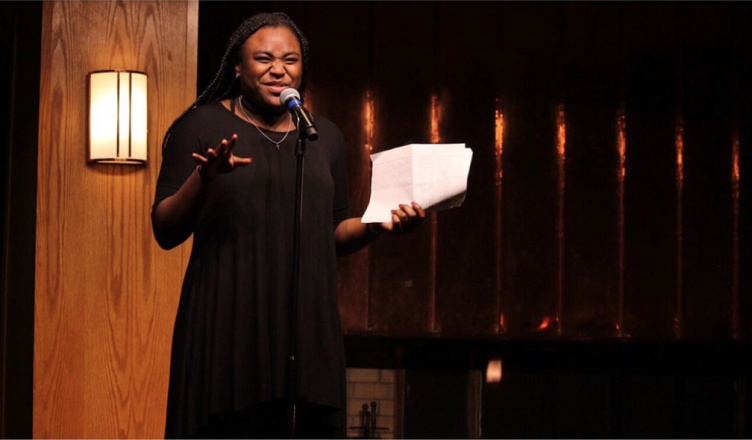 Two student performers stood side-by-side on stage in Potomac Lounge Saturday night, projecting to the crowd a shared monologue about their bodies and the bodies of women all around the world — bodies with “No gloves, no mask, no protection from the sun, or the boss, or the foreman, or the President.”

The monologue was “I Call You Body” by Eve Ensler, the spotlight piece of this year’s performance of “The Vagina Monologues,” brought to Towson by the Center for Student Diversity for its annual two-night rendition.

“The Vagina Monologues,” an episodic play compiled by Ensler from the mid-’90s to today, consists of stories told by women about the issues they face regarding sexuality, vagina ownership and womanhood.

According to student co-directors Charlotte Smith, a Towerlight contributor, and Elizabeth McLaren, this year’s performance at Towson almost didn’t happen.

“We had to go back to the directors from last year and be like, ‘Hey, no one’s done anything yet, and we want to get the ball rolling,’” junior psychology major McLaren said

Traditionally, the play is performed earlier in the semester.

“I guess we kind of assumed that seniors were going to direct, which is why we waited so long,” Smith said. “Eventually nothing really happened, so me and Liz were like, ‘this is so important to us, we don’t want this to just disappear.’”

Smith and McLaren both performed in last year’s “Monologues,” and the pair came back to make their directorial debuts after feeling empowered by the experience.

“Last year, my aunt who’s in her 50s came out,” She’s a nurse and she was like, ‘I’ve never thought of my vagina that way. I’m just so moved by what you guys have said on that stage, and I’m just more inclined to do things about it — spread awareness, donate to domestic shelters, just empower women in general.’”

Topics in the Monologues range from light-hearted to heavy, best illustrated by two monologues performed almost back-to-back: “Vagina Happy Fact” teaches the audience that the clitoris has a higher concentration of nerve fibers than anywhere else in the male or female body (“Who needs a handgun when you’ve got a semi-automatic?”), while “Not-So-Happy-Fact” explores the prevalence of female genital mutilation.

In “The Flood,” Dows assumed the identity of an older woman who was embarrassed by a romantic partner after a sexual mishap in her youth and became permanently trepidacious around men.

“I can’t tell you about ‘down there,’” Dows stage-whispered to the audience. “You just know it’s there, it’s like the cellar: the door stays shut.”

Although “The Flood” was meant to be insightfully funny, Dows acknowledged the story’s larger purpose.

“The monologues give us, as the performers, an opportunity to have a space to express ourselves and to explore a topic that is usually kind of undermined or pushed away from normal performances,” she said. “But it’s also a way for people in the audience to engage with a conversation that’s not usually happening.”

Sophomore Caroline Floyd, who performed in the play’s introduction, expressed that such a conversation is especially important today.

“I feel like the stigma with these issues is building up even more, when it should be breaking down, because the issues are becoming more and more prevalent,” Floyd said. “So hopefully doing this will give other people the opportunity and also the courage to talk about some of the issues we’re discussing.”

“I Call You Body,” a new monologue that closed the show by demanding safe workplaces for women everywhere, showed that the issues described in “The Monologues” are still as relevant today as they were decades ago.

“I want people to stop thinking that feminism is a dirty word or a joke,” McLaren said. “Because these are real issues…These are monologues from real people. People were actually interviewed, and they said these things, so obviously these are really relevant. These are valid feelings that people have. It’s not just a regular play that someone wrote. These are actual people’s stories.”

All of the proceeds from Towson’s 2017 “Vagina Monologues” were donated to House of Ruth, a domestic violence shelter in Baltimore.