I didn’t want to have to write this, but after watching the Tennessee Titans cases rise and a few games get postponed I think it’s important to talk about. After five weeks of football, we’ve hit the point in the season that I’m starting to question whether or not it will finish.

Early in the MLB season, they had a bunch of games either postponed or canceled because of COVID-19 outbreaks. The team most affected was the Miami Marlins who had 18 cases in the organization and had eight games postponed. 15 other teams also had games postponed including the New York Yankees and Toronto Blue Jays.

In the NFL, when the Tennessee Titans had 23 members test positive in the past few weeks, it immediately reminded me of the Marlins outbreak. It’s not surprising that something like this happened, especially since the NFL has so many more people involved. If no one broke protocol it would be hard to blame or punish Tennessee. But while the facility was closed a few players worked out at a local high school.

I’ve seen a lot of talk about forfeiting games since two games have been rescheduled and a few teams including the Pittsburgh Steelers have also had their bye week changed. The argument that it’s unfair to the Steelers that their bye is changed by something completely out of their control is a fair one. At this point, because only 13 of the 23 Titans members who tested positive are players, I don’t think it’s fair to forfeit yet. The only player who is known to be at the workouts is quarterback Ryan Tannehill who tested negative. Two players were added to the reserve/COVID-19 list after the workout, tight end MyCole Pruitt and defensive end Breon Borders. Because Tannehill is the only player confirmed at the workout, it’s safe to assume it was only offensive players in attendance. If either Davis or Pruitt, or both were present I’d fully support a significant punishment for the players and the organization. But because it’s unclear who was at the workout I think it’s only fair to let an investigation conclude before we start handing out punishments.

While the Titans have been the most affected, there are still eight other teams who have been affected. Arguably the team affected the most is the Buffalo Bills. Despite no positive tests they have had three games rescheduled. They were scheduled to face Tennessee Oct. 11, but for the second time in 70 years they had to play an NFL game on a Tuesday. The Bills lost to the Titans 42-16, and fell to 4-1. The Denver Broncos also had some changes even without any positive cases. Their week eight bye was moved up to week five, and three games were rescheduled.

I feel bad for the teams that don’t have any positive cases yet still have to deal with rescheduling. They haven’t done anything wrong but have suffered some consequences for nothing more than some bad luck in timing. If any team should be mad about this, it’s teams like the Broncos and Bills. I’d say especially for Buffalo who has been playing well so far and has a legitimate chance to win their division for the first time since 1995.

At this point, I think the season will be able to be completed. When this happened in baseball it affected the league for a few weeks early in the season but as the season progressed it wasn’t a problem anymore. Once everyone figured out what was expected and got into a routine, there wasn’t a sudden spike in positive tests. I think something similar will happen in the NFL. It’s still only five weeks into the season, teams and players are still adjusting to the new norms. My best guess is within a few weeks the teams and the league figures this out and by early November I don’t think this becomes a problem. If it does, I also think the NFL will have a better idea of how to punish teams who don’t follow protocol.

Everyone’s still trying to figure this out while also playing football at the highest level. This is new to everyone, and I think it’s going to take some time before they get comfortable with it. There’s definitely the thought in the back of my head saying the season isn’t going to make it 17 weeks. But especially in times like this I try to be optimistic. I think they will figure it out and find a way to finish the season, and hopefully, in a few weeks, we can truly start to focus on football. 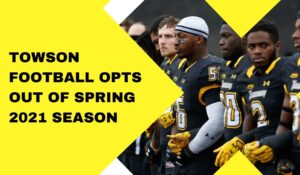