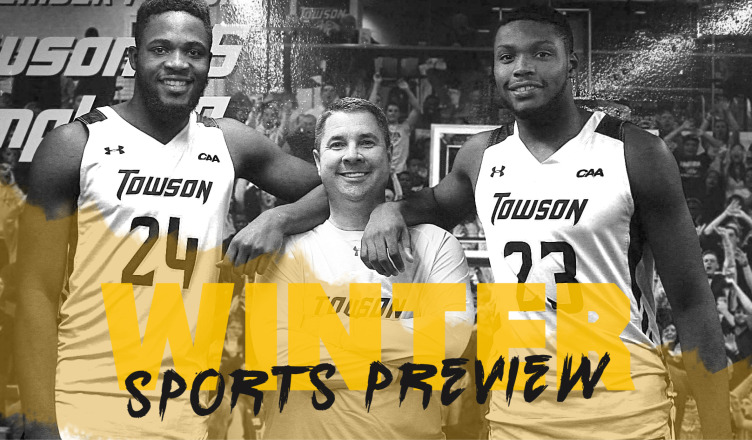 Since the Colonial Athletic Association (CAA) Tournament was brought to Baltimore in 2014, Towson has suffered heartache and defeat on the big stage.

This year, the tournament will be moving to Charleston, South Carolina, and the team hopes a new location will come with a new result.

“This year we are focused,” senior forward Arnaud William Adala Moto said. “Winning the CAA, trying to get to the NCAA Tournament. That’s the goal this year.”

The Tigers captured 20 wins last season and are be bringing back the nucleus of that team. Along with Moto, junior guard Mike Morsell and senior forward John Davis will be back on the hardwood.

Davis, who started 29 games for the Tigers last season, averaged 10.3 points per game and made a difference on the boards. He ranked 17th in the CAA with 5.5 rebounds per game.

Towson will also see junior guard Deshaun Morman in action this season. Morman transferred from Cincinnati and had to sit out last season due to the NCAA transfer rules.

“At Cincinnati, I just felt like it wasn’t a family,” Morman said. “When I took my visit here I just had a good connection with all the coaches, and it just felt as one. Since I’ve been here, it’s just been a lot of support.”

“We scheduled aggressively trying to play good teams in non-conference,” Head Coach Pat Skerry said. “You want to win every game, but you also got to make sure you keep getting better so that when the guts of the conference season is there that you’re playing your best level of basketball.”

Towson was picked to finish second in the conference behind the reigning CAA champion, UNC Wilmington.

The Tigers will begin their conference schedule against the Seahawks on Dec. 31 at SECU Arena.

Towson will conclude conference play with a contest in Williamsburg, Virginia, against William & Mary before heading to Charleston.

“We’re just excited,” Skerry said. “We know that we can be very good. We just talked about staying consistent and staying connected.”

The Tigers will be relying on defense this season as they attempt to improve.

Another concern for Towson this season will be getting wins outside of SECU Arena, something the team only managed to do once in 15 games last year.

Last season, Bankston led the Tigers in scoring by averaging 15.5 points per game, while Bush finished with 71 points and 67 rebounds.

Bankston stressed her relationship with teammates Martin and her sister, redshirt junior guard Raine Bankston, as crucial to her success.

“Me and [Martin], along with my sister, have really great chemistry and just try and play off of each other,” Raven Bankston said.

Junior college transfer Mary Cuevas will also join the Tigers this season. At ASA, Cuevas averaged 7.3 points per game and shot 53.5 percent from the field.

The Tigers will hope to improve on their poor conference record from last year and make a mark in the CAA tournament.

“When we play good defense we can stay in games longer and it’s easier for us to score,” Geckeler said.

Only time will tell if this Towson team is up to the task.

After a strong start to the beginning of its season, Towson returns to action for a three-day meet at the Bucknell Invitational on Dec. 2 at Kinney Natatorium.

“We really look at the Bucknell invitational that we are going to as our midpoint of the season,” Head Coach Jake Shrum said.

The Tigers will compete against Navy, Delaware and James Madison. They will also participate in the three-day Nike Invitational meet at Chapel Hill starting Feb. 3rd.

Towson’s final competition at home will be Jan. 14, when the women’s team faces off against Bowling Green at Burdick Pool.

“We’ve had a large portion of each team have a series of terrific swim meets,” Shrum said. “Some people are still trying to figure out how to feel out some of their better events, but we are in a really good place from a training standpoint.”

On the men’s side, sophomore Jack Saunderson and senior Dominic Breschi have had impressive seasons.

Breschi set the school record for the 100-yard backstroke with a time of 47.66 and was recently named CAA Swimmer of the Week.

On the women’s side, juniors Jacy Icard and Kendall Krumenacker have led the team so far this season.

At Towson’s most recent meet against George Mason, Icard set the school record for the 100-yard backstroke with a time of 54.62, while Krumenacker placed within the top-three of three events.

With almost three weeks to key in on improvements, Towson hopes to return to competition revamped and fully focused.

“Our mentality will be to maintain and improve our speed and conditioning through exams and winter break before coming back during minimester to continue to develop our speed and our endurance at peak speeds,” Shrum said.

Towson is hard at work preparing for the 2017 season, which begins with a season opener against Southern Connecticut  Jan. 7, at SECU Arena.

The Tigers are led by Head Coach Vicki Chliszczyk, who is entering her seventh season. She is banking on an expanded roster to help spread out the workload among team members.

“This year we are looking at the extra depth as a tool to help us game plan. It will allow for us to pick and choose who is best for each event, which helps keep the team well rested,” Chliszczyk said.

The expanded roster includes 19 Tigers — six new members and 13 returning members. This is the largest roster the Tigers have had in the history of the program.

Sophomore Mary Elle Arduino and junior Tyra McKellar are leading the way for the Tigers as they head into the season.

Arduino looks to build off her impressive freshman season, during which she was named a balance beam specialist for the Athens Regional.

McKellar looks to make NCAA regionals for a third year in a row after competing in all-around competition at regionals as a freshman and sophomore.

Freshman Melissa Temkov, a Canadian National Champion, is looking to make an impact in her first season at Towson.

The Tigers will have 11 meets this year — five at home and six away. This year includes an added home meet, which is a chance to allow the students to have another chance to support the team.

“Support from the students is very important,” Chliszczyk said. “These girls work hard day in and day out and having students there to cheer them on helps fuel the team.”

In addition to the 11 meets, the Tigers will participate in the EAGL Championships in March, where they placed sixth in 2016.

The team also hopes to qualify for the end of the season’s NCAA regional championships.

Mike Jackson is preparing for his second season as head coach at Towson and hopes to lead the team to continued success.

The Tigers first event this season is Thursday, Dec. 1, in Annapolis. The Tigers will compete in the Navy Lid Lifter.

Towson will compete in six more indoor track and field contests throughout the season, and three of the six events be in-state.

The Tigers will look to qualify their athletes for the Eastern College Athletic Conference (ECAC) Division I Indoor Track Championships. The ECAC will run March 3-5 in Boston.

Towson will have its last chance to qualify athletes for the ECAC Feb. 25.

Last season, eight Towson athletes qualified to compete in the 2016 ECAC at Boston University’s Track and Field Pavilion. The team placed 29th out of 44 teams.

The Tigers indoor track and field team had a successful season last year after competing in the ECAC and now have the challenge of performing at a similar level this upcoming season.