Towson split decisions this weekend at Burdick Pool against Colonial Athletic Association (CAA) rival William & Mary as the men’s team took a loss while the women’s team captured a victory.

Towson began the meet with a second-place finish in the 200-yard medley relay as senior Nicki Breschi, freshman Ryan O’Leary, sophomore Jack Saunderson and junior Nick Essing combined for a time of 1:33.05.

Breschi also had a first-place finish in the 100-yard backstroke with a time of 51.12. 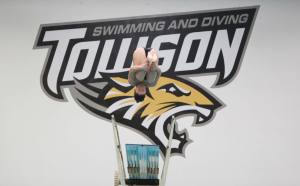 On the women’s side junior Kendall Krumenacker and sophomore Ashley Illenye highlighted the Tigers victory by winning three events each.

The Tigers also had two top-three finishers for the 100-yard backstroke. Junior Jacy Icard timed 56.12 to win the event, while senior Olivia Evans finished third with a time of 59.44.

Illenye continued her good performance, timing 2:06.31 in the 200-yard butterfly to win the event. She capped off her day by winning her third event with a time of 5:00.75 in the 500-yard freestyle.

On the diving boards, sophomore Emily Wilson won the one-meter event with 240.67 points, and fellow sophomore Kelsey Jehl won on the three-meter boards with 291.60 points.

Despite not being able to sweep the dual meet, Shrum is happy with his team’s progression this season.

“Both teams are doing a great job of using what we are working on in practices into their races at meets.”

Towson competes on the road in the George Mason POD Meet on Nov. 4 and 5.