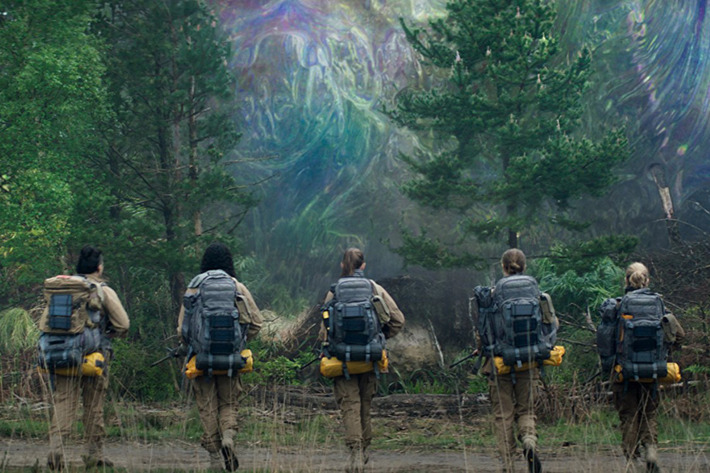 Four years after Alex Garland’s directorial debut of the critically-acclaimed “Ex-Machina”, he has finally followed it up by giving us “Annihilation”; a psychedelic thriller taking on perplexing concepts and entrancing effects, that has unfortunately been disguised by trailers as a silly horror flick.

Based on Jeff VanderMeer’s Southern Reach Trilogy, the film opened up like any good sci-fi movie should: with an asteroid plummeting to Earth into a lighthouse. In a future not so far away, cellular biologist and ex-U.S. army soldier “Lena,” (Natalie Portman) is in mourning of the presumed death of her husband “Kane” (Oscar Isaac), until he mysteriously appears to reunite with his wife. The reunion is cut short when Kane suddenly becomes deathly ill, resulting in him and Lena being taken to Area X. There Lena meets psychologist Dr. Ventress (Jennifer Jason Leigh) who explains that she and the compound have identified and have been researching what they call “The Shimmer” (which looks like a massive oil-spill) since it’s been expanding out from the lighthouse. It’s up to Lena, Dr. Ventress, paramedic Anya Thorensen (Gina Rodriguez), physicist Josie Radek (Tessa Thompson) and surveyor Cass Sheppard (Tuva Novotny), to explore the meaning behind The Shimmer.

It took awhile for the film to get started, but once it did, it was well worth the wait. The intense visuals soon became the biggest success of the film. The landscape of The Shimmer was filled with creatures that range from beautiful abnormalities, to Frankenstein-esque mutations. Yet even when there wasn’t a bombardment of top-notch monsters, there was a level of tension that hovered over “Annihilation” through its ambiguous circumstances and questionable views.

With such an extreme climate, it was a disappointment to watch the all-star cast be so restrictive in their performance. Our heroes faced off with an alligator with teeth similar to that of a shark’s, yet Portman and Leigh acted oddly expressionless to this discovery. The characters’ presence didn’t add anything to the film; they were there to drive the plot forward until we got to the core of The Shimmer — and the point.

By the halfway mark, any curtain of ambiguity the film had started to be pulled up, and it was kind of a shame. While it wasn’t a shock how Lena’s backstory and the plot became so conveniently intertwined, the presentation of it was incredibly blatant. Especially when the character’s dialogue stopped being dialogue; it quickly devolved into exposition that is only so the viewer could catch on to what Garland was ultimately trying to say. Such examples can be chalked up to the one line: “Isn’t self-destruction coded into our cells?” No matter how deep Garland thought that sounded, it came off like an amateur move just to ask the audience “Do you get it yet?”

“Annihilation” definitely could be polished up, but those flaws never truly compromised the overarching themes introduced. Along with the visuals, this film adds a new conversation piece to the table that sci-fi has been missing for quite a while. No matter what, every viewer will get something out of this film.