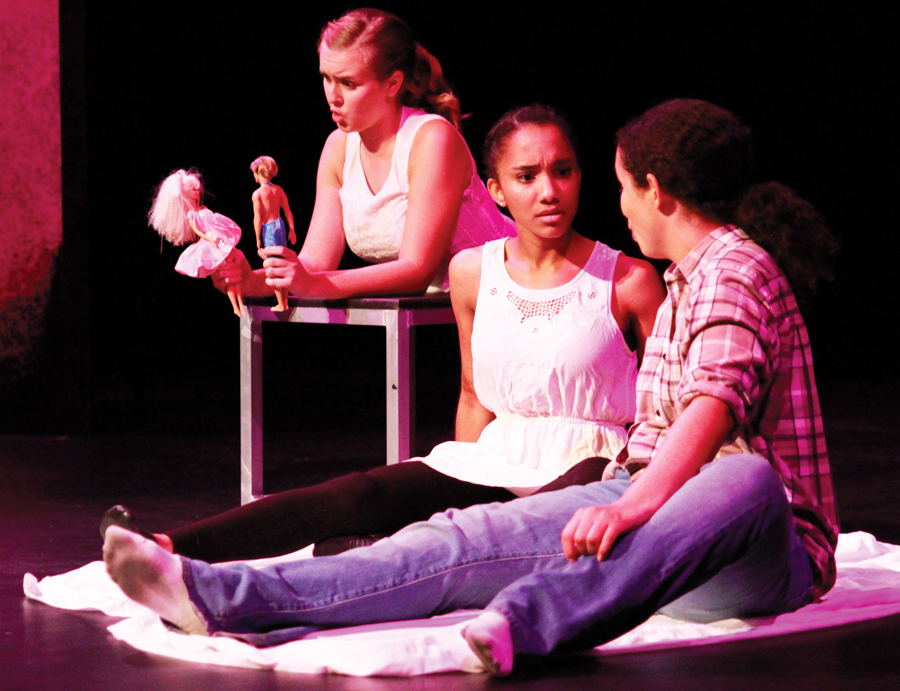 One in five women will be raped in their lifetime, according to the National Sexual Violence Resource Center. Rape victims can experience chronic physical and/or psychological damage after the incident.

“Vajungle,” written by Towson student Mani Yangilmau and directed by fellow student Tiana Bias, explores the aftermath of sexual violence and the effect on its victims.

The 45-minute one-act show invited the audience to shed their discomfort and enter into a raw, honest discussion about rape culture and the reality that sexual assault victims face everyday. “Vajungle” ran from Sept. 30 to Oct. 3 at the Center for the Arts.

“It’s really hard to talk about things like this,” writer and senior acting major Mani Yangilmau said. “I have a lot of really close friends and a lot of people in my life who have had to go through sexual assault and rape experiences. I think it’s very important for issues like relationships and female sexuality to be discussed in society and generally, it’s not.”

Yangilmau, as an actor and a playwright, describes herself as “very stylized,” a trait that seeps into her work.

“Vajungle” isn’t your typical linear narrative, it uses an eclectic combination of singing, dancing and symbolic movement. Together the five women paint a picture of the struggle to reclaim their bodies and cope with their individual trauma.

In “Vajungle,” Yangilmau and Bias take a great deal of care and thoughtfulness when revealing the innermost thoughts and fears of the characters.

The show balances heavy subject matter with a few well-timed comedic bits that alleviate any tension the audience might be feeling without drawing away from its message.

During the course of the play, one or all the women perform soliloquies and stylized movements and interact with each other or the haunting male character in order to portray different parts of the self that are broken after sexual assault.

Each woman has her own unique way of surviving and viewing her world—one woman copes by reveling in her private sexual fantasies, where she knows she’s in control.

Another woman uses her wry sense of humor and a bag of peppermint patties.

The climax of the play comes at the end, when Woman #5 proclaims her right to love herself after spending the entirety of the play being silenced by the other women, her rapist and her own fears.

“The amount of vulnerability our actors had to achieve to be able to do this, that’s hard,” Bias said.

“A lot of the first rehearsals were us just sitting down and talking about rape culture and how it affected us personally and how we could incorporate it into the work,” Yangilmau said. “It worked really well.”

The talk-back session after the show allowed audience members to reflect on the role that rape culture plays in our society and to discuss their interpretation of “Vajungle,” how they felt the women were coping, and if they thought the characters would fully heal one day.