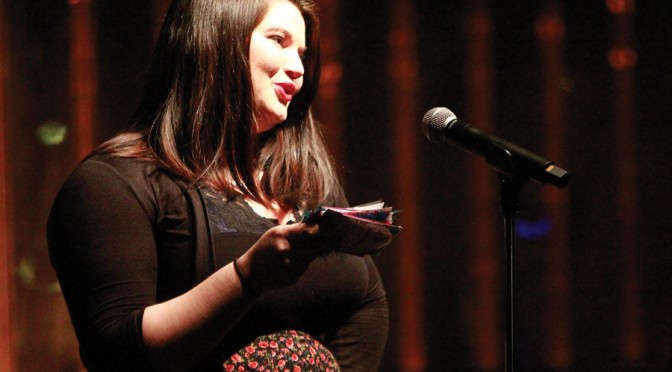 Dressed in black, Tori Markham stands before the microphone on the dimly lit stage with her eyes closed.

Though the story she tells is not her own, the way in which she tells it shows the audience that this is not a fairytale.

Markham, a junior and psychology and electronic media and film major, read the true and powerful story “My Vagina was My Village” for her part in this year’s performance of The Vagina Monologues on Friday night in the University Union.

The monologue she read was based off of the accounts of women from Bosnia and Kosava who were held as refugees and raped as a warfare tactic during the war in Yugoslavia.

Educating people about, and working toward eliminating these kinds of crimes and other acts of violence against women and girls, are the primary focus of The Vagina Monologues and the global activist movement V-Day.

“I just think that the conversation needs to be happening all of the time … there is just so much that needs to be said about it,” Emily Walsh, senior and co-director of The Vagina Monologues at Towson, said.

The monologues that were performed came from “The Vagina Monologues,” a play written by activist Eve Ensler who also began the V-Day movement as a response to the feedback she received from her play.

In 2012 V-Day launched the “One Billion Rising” campaign, the biggest mass action to end violence against women in history. It began as a call to change the statistic that currently one billion, or every one in three, women or girls on the planet have been beaten or raped during her lifetime.

“I think this whole thing is really important and is even bigger and scarier than we ever thought it was, but if we bond together we can do a lot to work against it,” Walsh said.

The Towson Feminist Collective, an on-campus organization that promotes equal rights for women, helped to organized the event with the women’s resources department in the Center for Student Diversity. Walsh said that these organizations focus on eradicating the culture that causes gender inequality both worldwide and on campus.

Walsh and Murray both said that another purpose of The Vagina Monologues is to give women a safe space and encourage frank discussion about subjects such as their sexuality and their bodies.

“I think in our media you see what people want you to see,” Murray said. “There are not really people talking about, ‘What’s the woman’s take on how they are having sex,’ or about how their sexuality is being portrayed.”

Providing The Vagina Monologue performers the opportunity to speak openly about these topics helps them to get in touch with their own sexuality. Murray said that this helps them to understand and resonate with the stories of the women in the monologues.

“I feel like actually being in the monologues and doing them is a very liberating experience as a woman, to be able to talk about sexuality, and it helps them find their own sexuality in the end of it too,” Murray said.

Markham said that after reading and discovering the sadness inherent in her monologue, she felt that learning about the experiences of the women from Bosnia and Kosovo helped her to become less judgmental in her life.

“You really don’t know what other people are going through, somebody can be walking around and have something terrible happen to them and they have no way of conveying that and I would have no way of knowing that,” Markham said. “I think it has just made me be a little more accepting in my everyday life and wanting to be more involved in the movement for the end of inequality.”

All proceeds from the event were donated to TurnAround and House of Ruth, domestic violence and sexual assault centers in Baltimore.