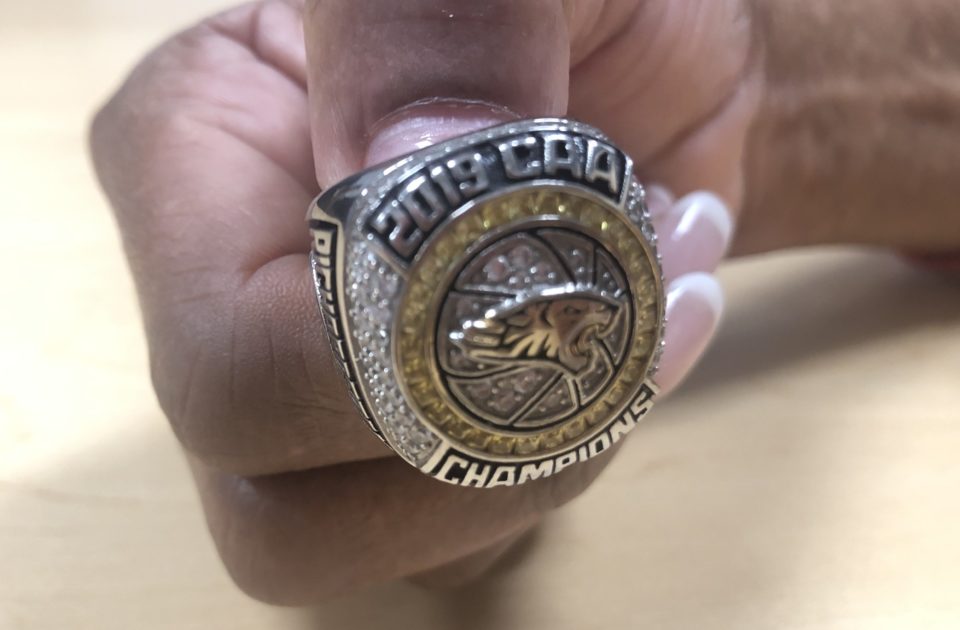 photo by Tim Klapac/ The Towerlight

The women’s basketball team had a special present waiting for them when they arrived for the fall semester.

The team was awarded their rings for the program’s first ever Colonial Athletic Association (CAA) championship.

“I was very excited because we’ve been waiting a long time for them to come in and that’s an accomplishment not many people get to enjoy,” said senior forward Nukiya Mayo.

Being the first Towson team to accomplish this isn’t lost on anybody, as the rings say “First Ever” on one side.

Especially because the odds were stacked against us and nobody thought we would do it,” said head coach Diane Richardson. “This is a constant reminder that we were the first ever to do it.”

The Tigers entered last season No. 8 in the CAA preseason poll, but managed to earn the No. 4 seed in the CAA Tournament in March. Victories over tournament-host, and No. 5-seed Delaware, No. 9-seed Hofstra, and No. 2-seed Drexel helped Towson make history and earn a berth in the NCAA Tournament for the first time.

“On the bottom of the ring, it says “legendary” and that embodies the whole feeling we got to do this and are the first ever,” said senior guard Ryan Holder. “No one can take it from us.”

With the rings come expectations for the Tigers, who return four of their five starters to this year’s roster. With the season opener still two months away, the team has some time to revel in their accomplishments, but they know what is on the horizon this year.

“It’s turning the page and focusing,” said Mayo. “We have a goal to accomplish.”