The Tigers’ women’s cross country team traveled to the Princeton Invitational to close out their regular season on Saturday. As a team, they finished in 19th place out of 24 teams in the 3.86-mile race.

Due to measuring error, this course was slightly longer than the usual 6 kilometer race that the women’s team typically runs.

Paving the way for another strong showing by the Tigers was junior Megan Knoblock, who finished in 82nd place, finishing with her third best time for a 6 K at 23:16.4.

Similar to previous races for Towson, their underclassmen gritted out another string of strong performances to round out the Tigers’ top five. Freshman Abby Gauthier came in 10 seconds after Knoblock, achieving 89th place and a solid 23:26.1.

“We are pleased with the team performance today,” Head Coach Mike Jackson said on towsontigers.com. “We have already switched out focus to CAA Championships. It was a fast and competitive race today and a great preview for our regional race in mid-November.”

Sophomores Hannah Walter and Emily Johnson came in after Gauthier, both running near personal records with times of 23:36.6 and 24:05.5, respectively.

Towson will get another two weeks off before heading to the Colonial Athletic Association Championship, which will be hosted by the College of Charleston Oct. 31. The Tigers will then return to the location of the Princeton Invitational on Nov. 13 for the NCAA Mid-Atlantic Regionals. 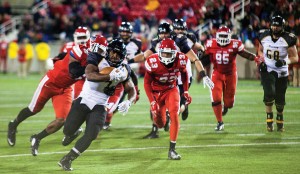