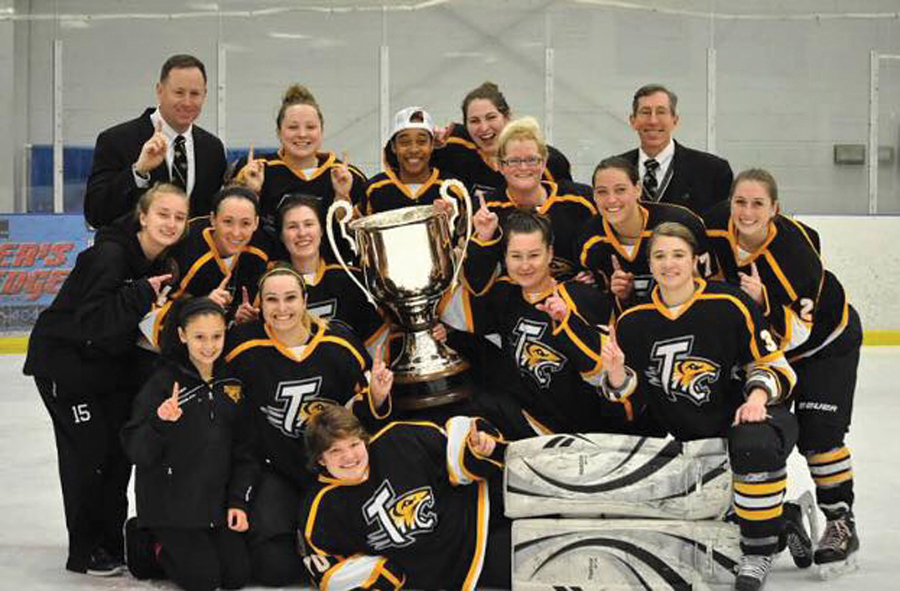 Towson capped off a perfect 15-0 season with the Delaware Valley Collegiate Hockey Conference Championship for the second consecutive year on Sunday after a 3-2 win over Navy at the Delaware State Fairgrounds.

After the first 20 minutes of play, Towson went into the locker room tied 0-0 with Navy in large part due to goaltender Lauren Wood who stopped a total of nine Midshipmen shots.

“Wood made some amazing plays throughout the entire game,” Club President Beth Kennedy said. “The championship was probably Wood’s best game all season with all the shots and great saves she made.”

After the scoreless first period of play, the Tigers struck first with an even strength goal from Sarah Rose at 5:24 into the period.

“Focus and scoring first was the key to winning the championship,” Kennedy said. “We knew the game was going to be close and a tough challenge. Our team is very physical and competitive with Navy so when we scored first with a rebound shot from Sarah Rose in the second period we kept the momentum and intensity up.”

While Towson took a 1-0 advantage into the second intermission, Navy drew even with a goal from Allyson Strachan just 23 seconds into the third period.

“Losing was never an option for us,” Treasurer Monique Burgers said. “When you are going into a game with a perfect 14-0 record, a loss is not part of your mind set. We never had a moment in the game where we lost control.”

The Tigers took a 2-1 advantage just shy of the 10-minute mark thanks to an even strength goal from Nicole Melchione at 9:15.

While Towson took its second one-goal lead of the game, Navy responded just 1:34 later with a power-play goal from Susan Wissmann.

“The game continued to be a back and forth battle,” Kennedy said. “Our coach gave us a pep talk during a timeout telling us to relax, focus and finish.

Shortly after a goal from the Midshipmen that tied the game 2-2, the Tigers answered with what proved to be the game-winning goal off of the stick of Emily Potere about a minute later.

“After the goal from Emily Potere, it was all about playing strong, solid defense,” Kennedy said.

“Since the game was very close through all three periods, the only time I knew we had the game locked up was once time expired,” Kennedy said. “The intensity and competitiveness of the game kept our team fighting until the last second. Once time expired, our team was overjoyed that we were champions once again. It’s an unbelievable accomplishment to be back-to-back champions and you could see it in each of our faces as we got to raise the cup once again and bring it back to Towson.”

Kennedy said aspirations are already high for next year’s team, as the Tigers will look to win their third consecutive DVCHC Championship.

“We have some good prospects that will be coming in the fall and I am excited to have them join,” Burgers said. “Although I will be graduating this year, I plan on sticking around and joining the coach staff next season. I would like for Towson University Women’s Ice Hockey to go three for three and keep the program a success.”