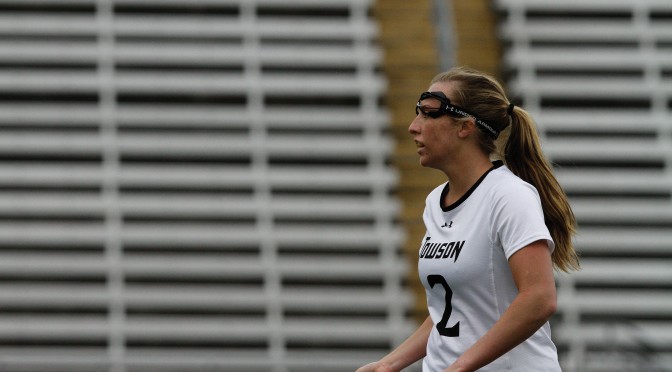 Towson lost its number one seed in the Colonial Athletic Association (CAA) after falling 11-9 to James Madison Sunday afternoon at Johnny Unitas Stadium.

“We had some uncharacteristic mistakes, some uncontested errors that you can’t afford to have against a team like JMU.” Head Coach Sonia LaMonica said.

The game started off well for Towson, as redshirt junior Michelle Gildea shot high from close range in the opening seconds.

After two separate fouls on James Madison defenders Towson scored its first goal of the game as Emily Gillingham scored her 18th goal of the year from a free position shot.

However, the Dukes quickly equalized after the Tigers failed to clear a turnover and senior attacker Brooks Lawler scored unassisted from close range to level the score inside of 4 minutes.

Redshirt junior attacker Alyssa Ferro then scored two straight goals for Towson after receiving assists from the edge of the area from Gillingham and freshman midfielder Natalie Sulmonte.

Betsy Angel then tied the game up with a shot from the right hand side before Gaudian weaved through the middle of the Tigers defense and gave the Dukes a 4-3 lead with 17 minutes left in the half.

Towson tied the game 4-4 after a pass from the right side from Samantha Brookhart to Kaitlyn Montalbano with sixteen minutes to go.

Gildea then scored a goal from a free position from the right side to give the Tigers a 5-4 lead with 15:30.

The Dukes then scored two goals in a row to take a 6-5 lead, the second goal came from Jaci Gordon as the senior midfielder collected a ground ball and blazed right through the middle of the Tigers defense before scoring.

Ferro then completed her second career hat trick after scoring a one-timer goal while being hacked in the middle of James Madison’s defense as she received a pass from Brookhart. Gordon then scored the final goal of the half with nine minutes left.

Sulmonte helped Towson equalize on an unassisted goal just four minutes into the half. Brookhart then gave Towson the last lead they would hold in the game after scoring from the left side of the field.

James Madison went on to score four of the last five goals in the game over the final 20 minutes.

The scoring streak was sparked by Taylor Guess who weaved through the middle of Towson defenders to equalize at eight with 17 minutes to go.

A free position goal from Betsy gave the Dukes he lead before sophomore Katie Kerrigan scored a goal from a nearly impossible angle from the left side of the net.

Trailing 10-8 with 10 minutes to go, Towson crucially won the face off and after a James Madison foul Montalbano scored five hole from the left side of the field on a free position.

Gordon closed out the scoring with an unassisted drive through the middle of the field.

A penalty on senior defender Emily Roth for two minutes helped James Madison close out the game by passing around Towson’s defense until the final horn.

Benson finished the game with five saves but suffered her third loss of the season.

Towson wraps up its season on against the University of Connecticut at home Sunday at noon before entering the CAA playoffs as a number two seed.