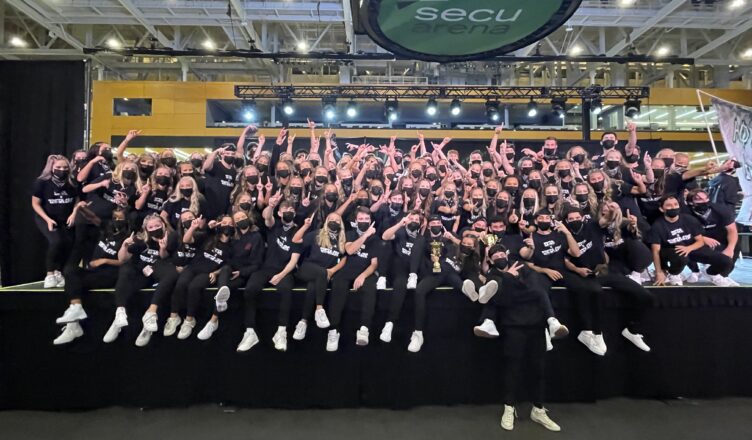 Zeta Tau Alpha and Theta Chi won 2021’s Dance the Madness competition. The event took place on Oct. 14 at SECU Arena for the first time in two years after last year’s event was cancelled due to COVID-19.

The fraternity-sorority duo, with the theme of “Dance Trendz,” performed viral dances. Some of the songs they performed include the Cha Cha Slide, the Macarena, Gangnam Style, and the Wobble. As soon as the Cha Cha slide was played, the crowd got on their feet and started dancing along and singing from their seats.

The event featured nine different fraternities and sorority groups, as well as performances by the Allure Dance Team, the Pom Squad, the VIBE Dance Team, and the Fusion Dance Team. The Men’s and Women’s Basketball teams also made appearances, as did a couple members of the football team.

While most years only feature fraternities and sororities, this year featured other dance programs, as well as an extended audience.

“The thing with this event is that most of the time it’s the majority of the fraternities and sororities that are in attendance, but it was a very mixed crowd,” said Roodinz Vital, a primary advisor to larger greek life organizations at TU. “A lot of freshmen, sophomores, even parents came out to enjoy Dance the Madness.”

The competition had seven judges that all scored each dance routine from the groups. One of the judges was Kelly Hoover, Vice President of Student Affairs at TU. She described what she looks for in a good routine.

“I think synchronization is key, and good energy,” Hoover said.

Energy is something that sophomore Sam Sagel, a member of Theta Chi, said would help them win Dance the Madness.

“Honestly, I feel like tonight I think we’re bringing a lot of energy,” Sagel said. “I feel like we’re going to be the loudest out here, and really, that’s all that matters when it comes down to it.”

After it was announced that Zeta Tau Alpha and Theta Chi won, the two groups came together and started celebrating on the floor and yelling, before eventually moving onto the stage that the groups performed on. The two groups started chanting “Zeta Chi” as they posed for pictures.

Junior Olivia Weakland, a member of Zeta Tau Alpha, knew that they had a chance to win as soon as they stepped off the stage.

“I think the energy once we got off the stage, we just felt so ecstatic,” Weakland said. “Win or lose, we were so proud of all of us.”

Vital, who was the main planner of the event, said that Dance the Madness was great at bringing TU back together.

“It was great to see the camaraderie, the spirit, especially after a year that we’ve experienced being apart,” Vital said. “It’s great to feel the energy of everyone being back together.”