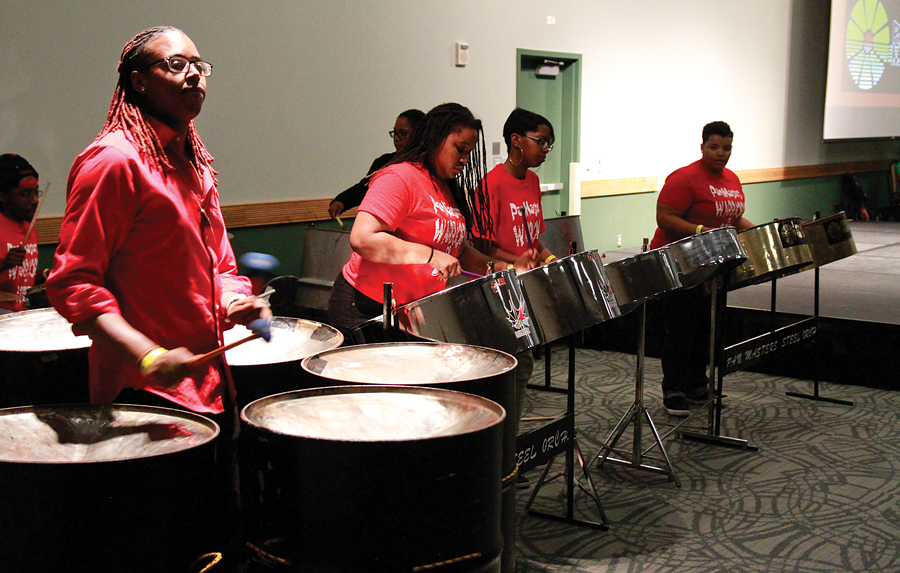 Thrilling and traditional Caribbean performances entertained a diverse audience this weekend at the “50 Shades of the Caribbean” Talent Show, organized by Towson’s own Caribbean Student Association (CSA).

The “50 Shades” title captured both the spectrum of island cultures and, in many instances, distinctly sexy Caribbean movement and sound. The show took place Saturday, April 11 in the West Village Commons where over 100 audience members enjoyed the live music, food, dancing, poetry and fashion.

Brown and co-host Rachelle Johnson, a junior and business administration major, kept the audience laughing with their humor as they transitioned between performances. During the night Johnson improvised a poem on the spot, and Brown played an electric guitar and joined in with the band.

Health science major and junior Vanessa Agbar came to the show to explore how Caribbean culture differs from the culture of her home country Nigeria.

“The culture is very similar but there are a lot of differences,” she said. “So I’m here to figure out what those differences are, and explore something new through the fashion, music and food.”

Agbar’s friend, sophomore and mass communications major Ochi Nwokoro said that the talent show was “like stepping into somebody else’s world without leaving your own.”

“I think it’s important for Towson to have events like these just because the campus is striving to be more diverse,” she said. “It’s a melting pot here on campus. I hope that it’s larger and larger every year so that more people can come and see the different cultures that we have.”

In Caribbean culture, food plays an integral role, and a wide variety of traditional dishes like jerk chicken and curry were available for everyone to enjoy before the show.

After dinner, the Commons erupted with the metallic, island sounds of the “Pan Masters of Steel Orchestra,” a Caribbean band who played an assortment of percussive instruments. One musician kept the rhythm on six steel barrels at once.

The music, accompanied by videos combating Caribbean racial stereotypes, gave the show a sense of balance between entertainment and social consciousness. These contrasting elements moved hips and heads, and set a tone of community within the audience.

Dancer and senior Adrianna Morgan encouraged everyone to get on their feet and learn a new dance move known as “screwing the light bulb.” Morgan, adorned in a belly-less red dress glinting with gold, performed a Trinidadian style of dance known as Chutney.

The combination of abdominal movements like belly dancing, and flourishing leg and arm work gave her performance a unique style and resulted in thunderous applause from the crowd.

“I’m confident in my skills, and also I’m very happy to be sharing my culture with my audience,” Morgan said.

Another act came from finance junior, Kassim Okusaga, who delivered an emotional rap about his friend Ricky, who was murdered.

“I thought to myself, ‘Life is too short, but I’ll make him live forever through the song,’” Okusaga said.

The motto of the show was “Out of many. One people,” and while the event showcased an impressive diversity within the Caribbean community, Okusaga was concerned about the lack of Caucasian students in attendance.

“I feel with every Towson event we do need more diversity,” he said. “There are great groups and great organizations that get silenced by the lack of popularity, and race plays a part in that.”

President of the CSA and junior Marie Christie planned, coordinated and even performed in the Talent Show with the CSA dance troupe.

“Not everyone in our organization or on our board is from the Caribbean, but they have a love for it, and they want to show that and express that to all of Towson’s campus,” Christie said. “I just love seeing people’s reactions, the happiness on their faces… It’s just a wonderful group of people.”