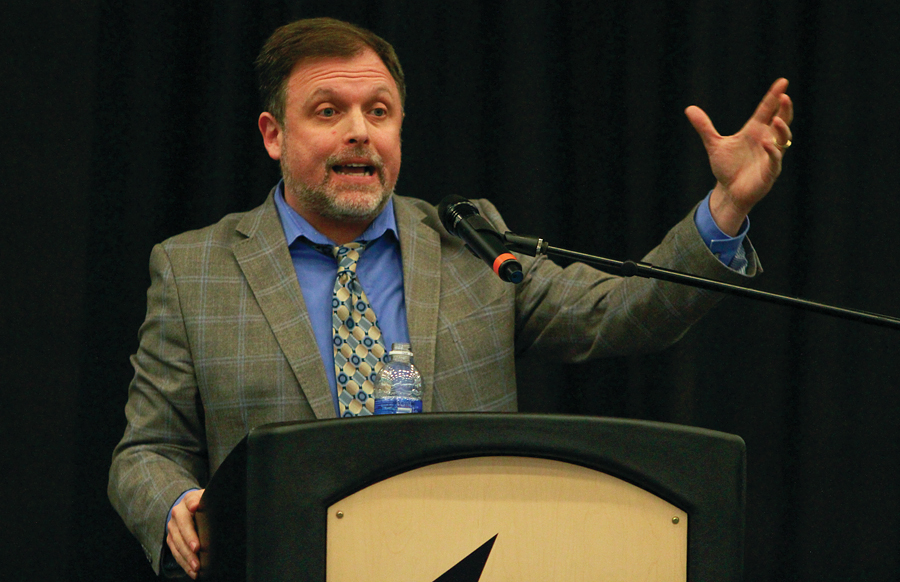 Towson got a healthy dose of cultural perspectives when antiracism activist Tim Wise came to SECU Arena on Wednesday, Sept. 23.

The event began with an introduction by Assistant Vice President of Student Affairs and Diversity Santiago Solis and senior English major David Ward.

Before beginning his lecture, Wise addressed the audience in saying he would call out any person who decided to leave early in order to establish the importance of what he was going to say.

He frequently spoke of the core concept that racism is rooted in systemic stratification, and how that influences all individuals of that system.

“I liked that he said that we share from the same fountain,” senior Jasmine Edwards said. “It’s nice to know other people are sharing the same struggle, and it gave me a new view of it.”

A key aspect of the event was understanding the historically founded problems around systemic racism and perpetuating awareness of it in everyday life.

“The people here need to take what they learned and what perspectives they valued here and bring them back to their communities,” Ward said. “We need to start by confronting racism and bigotry in our own circles with the people we love every day.”

Wise concluded his speech with a red pill/blue pill reference from “The Matrix” that paralleled society’s choice to learn the truth about the condition of humanity, or choose to remain ignorant and indifferent.

“You just can’t choose ignorance as an option,” Ward said. “Ignorance is an option that most people choose, but we need to stop that.”

Following the speech, audience members were invited to the microphone on the floor to ask Wise any lingering questions they may have had.

Many students who stayed for the question and answer portion expressed frustration that most of the students who attended the event for extra credit loudly exited the arena once they were not required to be there anymore, despite Wise’s request that they leave quietly.

“I enjoyed it, but I could see the looks on some of my classmates and peer’s faces just like ‘I want this to be over with,’ so it is encouraging and discouraging at the same time because there are people you know want to help, and you know there are people who are here for the points,” sophomore Saraubi Harrison said.