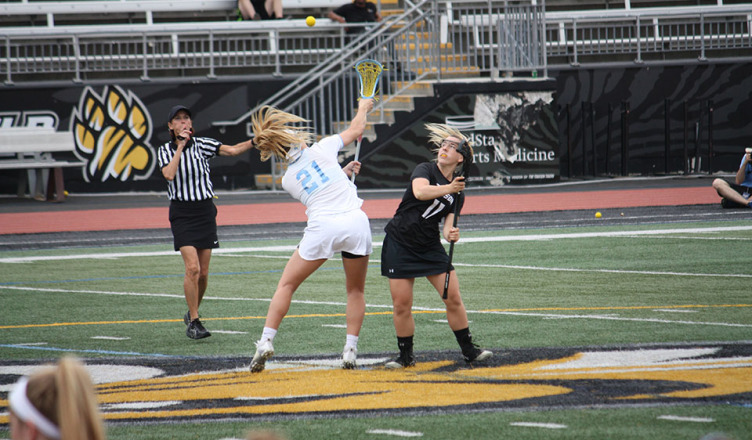 That goal sparked a 6-0 run for Towson and was capped off by a second goal from Tellekamp at 13:34.

Senior attacker Samantha Brookhart picked up one of her four assists on the day during that run.

“[Brookhart] is one of the leading passers in the country, and that’s because she works hard at her game and has a great skillset,” Head Coach Sonia LaMonica said.

In the first 10 minutes of the game, Towson’s defense held Johns Hopkins to just four shots. Sophomore goalkeeper Angie Benson made some difficult stops during that stretch.

“Those saves that Angie made were definitely clutch,” LaMonica said. “She found the ball and was ready to see some early shots.”

The Tigers scored the final four goals of the half and took an 11-1 lead at the break. During that run to close out the half, both Montalbano and Tellekamp recorded hat tricks.

In the second half, Johns Hopkins scored two of the first three goals to make it a 12-3 game, but Towson responded with a 5-0 run to take a 17-3 lead with just over 10 minutes left to play.

The Tigers scored once more on a goal from senior midfielder Michaela Duranti and secured an 18-5 victory over the Blue Jays.

“We were able to come out and really keep the foot down and have a very convincing win here today,” LaMonica said.

The Tigers return to action in the Colonial Athletic Association (CAA) Tournament semifinals Friday, May 5, at Johnny Unitas Stadium. Towson, as the defending champion and number two seed, will host No. 3 Elon at 6:30 p.m.