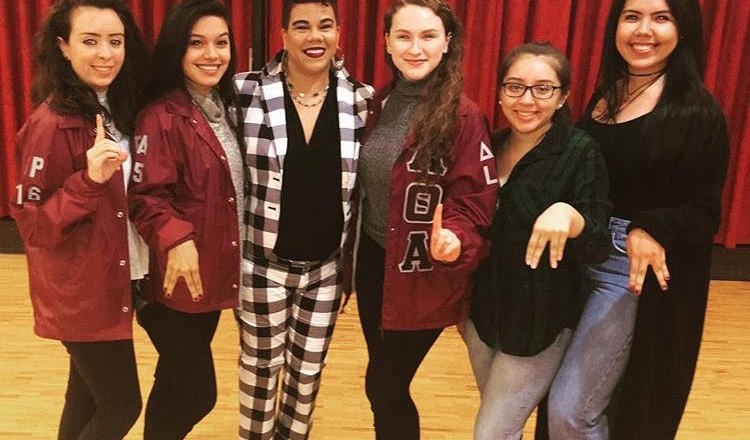 Self-described scholar-activist Rosa Clemente originally struggled to simultaneously embrace her identities as a black woman and a Latina, but she learned to love both parts of herself when she started college.

In college at SUNY Albany, Clemente uncovered and affirmed her identify as a black Puerto Rican woman, noting that “identifying as black was not easy” and she was often accused of “selling out” as a Latina. Just as she developed her identify in college, she noted that many students of color have a similar choice to make between black identity and their ethnic one.

The choice to “embrace blackness as a political signifier” was her way of navigating the “American binary of black and white, which has always excluded Latinx people.”

Clemente was invited to speak on campus March 29 by Towson’s chapter of the Lambda Theta Alpha Latin Sorority, which celebrates the establishment of their organization on campus every March.

In opening, Clemente remarked that she was happy to be speaking at Towson because it is “dope to be in a space where black and brown people are coming together, especially as students.”

She said she was honored to see so many students of color, especially women, in the audience.

Clemente started by exploring her roots growing up in both the Bronx and New York’s Westchester County, two communities that greatly differ in diversity and socioeconomic status.

She recognized privileges around her in Westchester County that her friends and family in the Bronx did not enjoy, such as the “privilege to go to college” or “privilege of not being undocumented.” Cousins who were just as smart and capable as Clemente were unable to access higher education.

Education, she summarized, is “one of the most political things in our lives,” plagued by a Eurocentric perspective that marginalizes students of color and other minorities.

Clemente said that those minorities are often “viewed through a lens of oppression, not resistance,” which prevents students from understanding their historical lineage. She said that one of the main reasons she sought her education was to use knowledge to better her community and become a scholar-activist.

Facing racism and microaggressions, Clemente gravitated towards her campus’ Black Alliance as a place for learning and a political training ground. She noted that there was a purposeful unity of African American and Latinx groups to represent students of color at their predominately white institution (PWI) and ensure their voices were heard.

As an Africana/black studies major, Clemente cites exposure to history and elders as a transformational experience that forced her to confront an omnipresent white supremacist and patriarchal paradigm that exists in the United States.

Although Clemente relished her time at SUNY Albany, she came to realize that PWI’s “never wanted us…. Most of our people will not be on a (higher education) campus” and “half of black women who apply for tenure are denied” despite published scholarship.

Those who do make it to college or university, are there thanks to student takeovers, protests, and organization, she said.

Citing levels of suicidal thoughts of students of color and other marginalized groups, she pointed out that they not only have to do their coursework, but also navigate spaces of racism, misogyny and homophobia. The stressors associated with doing so leads “many students of color to feel that they have to conform to white experience and narrative.”

After earning her bachelor’s degree, Clemente attended Cornell University for a master’s in Africana studies and began her career, which varied from activist to Vice Presidential candidate on the Green Party’s 2008 ticket as a “hip hop candidate.”

Catalyzed by police shootings, she sees new organizers beginning to come up, people who are willing to take a risk, organize and mobilize. Clemente urged strengthening the “youth to movement” pipeline to spur the next generation of social justice advocates.

“Have ultimate faith in our capabilities” she said with urgency, because this is a “fight for literal existence.”