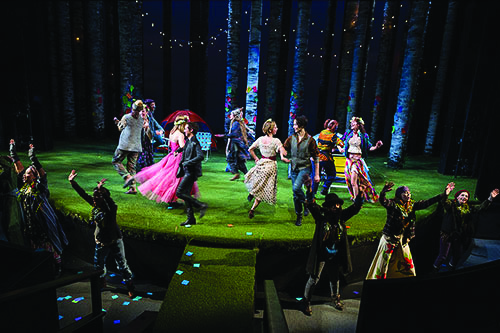 Towson’s theatre department is collaborating with Baltimore theater company Center Stage this semester to produce “As You Like It,” while the Center Stage theater undergoes renovation.

“The theatre department thought it was a good idea, but were concerned about if it could fit with everything else we needed to do and the logistics,” Dean of the College of Fine Arts and Communication Susan Picinich said. “My first thought was ‘we can’t fit this into our academic semester,’ but we wanted to do it so much and we talked about it with other departments in the building. The theater was really willing to make the Mainstage available.”

Towson made an agreement with Center Stage where the company would be able to use the space at a reduced rate if Towson students were able to be involved in their production.

“They are able to present their work, our students are able to work with those artists and our campus community has the opportunity to view their work,” theatre department chair Robin Quick said.

Six students were selected to be in the ensemble for Center Stage’s latest play. In addition to acting, several other students got involved through participating in stage crew, ushering and doing backstage liaison.

Senior theatre major Allie Press was one of the six students who was chosen to be a part of the ensemble. She plays a servant in the court as well as an exile. Press has performed in multiple Towson productions during her four years here, but said that working with the professional Center Stage actors was a different experience.

“You come and rehearse lines, but the professional actors just do it all at a higher caliber,” Press said. “Every rehearsal they come in giving 110 percent. They don’t mark anything and don’t hold anything back. They are always giving everything that they have.”

After “As You Like It,” which runs until Feb. 14, Center Stage will perform “Detroit 67” in April at Towson’s Mainstage Theatre.

The play revolves around the Detroit riots of 1967, and Center Stage’s artistic director chose “Detroit 67,” because of its connection to the recent unrest around Baltimore.

“We’re really enthusiastic about it because we think it’s a good idea to have a play that’s really responsive to the situation,” Picinich said.

Students can use the code 16TowsonU to get discounted tickets to “Detroit 67.”