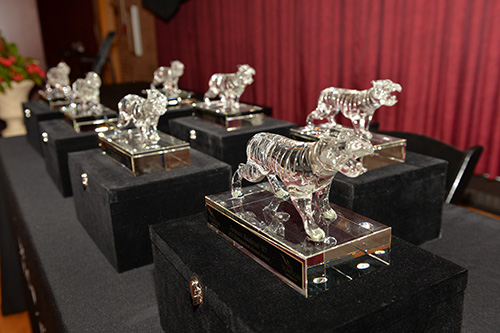 Hosted in the Chesapeake Rooms, the Volunteer Recognition Awards Banquet saw Board of Visitors Chair and Class of 1965 alumna Myrna Cardin claim the Spirit of the University Award.

Cardin, wife of Sen. Ben Cardin, is an active member of the University community.

“I must tell you how excited and proud and grateful I am to receive this award, and happy to be with all the people who have been honored tonight, and I really must thank the alumni association,” she said.

Once the entrée plates had been cleared, Alumni Association Board Member Glenn Ross began to present the awards. Each volunteer being recognized received a crystal tiger statue, and gave a short speech to thank those who had helped them.

Andrea Boucher, a retired professor of physical education from TU, shared that one of her favorite memories from her time teaching was working with her colleagues, and one of the best things about Towson were the students.

Boucher said she enjoys staying in touch with those she mentored, and believes that building strong relationships with students is very important.

Class of 1965 alumna Judith Kistner and her husband Louis Kistner each received the 2016 Athletic Alumni Volunteer Service Award. The pair encouraged other community members to “join the excitement of rooting for the home team.”

A’Hern thanked his parents during his speech, and said “it was my parents who taught me about selflessness.”

The 2016 Faculty Alumni Volunteer Service Award went to College of Business and Economics Dean Shohreh Kaynama, who is also a Class of 1976 alumna.

Prior to the ceremony, President of the Alumni Association Lance Johnson and Towson University President Kim Schatzel delivered opening remarks.