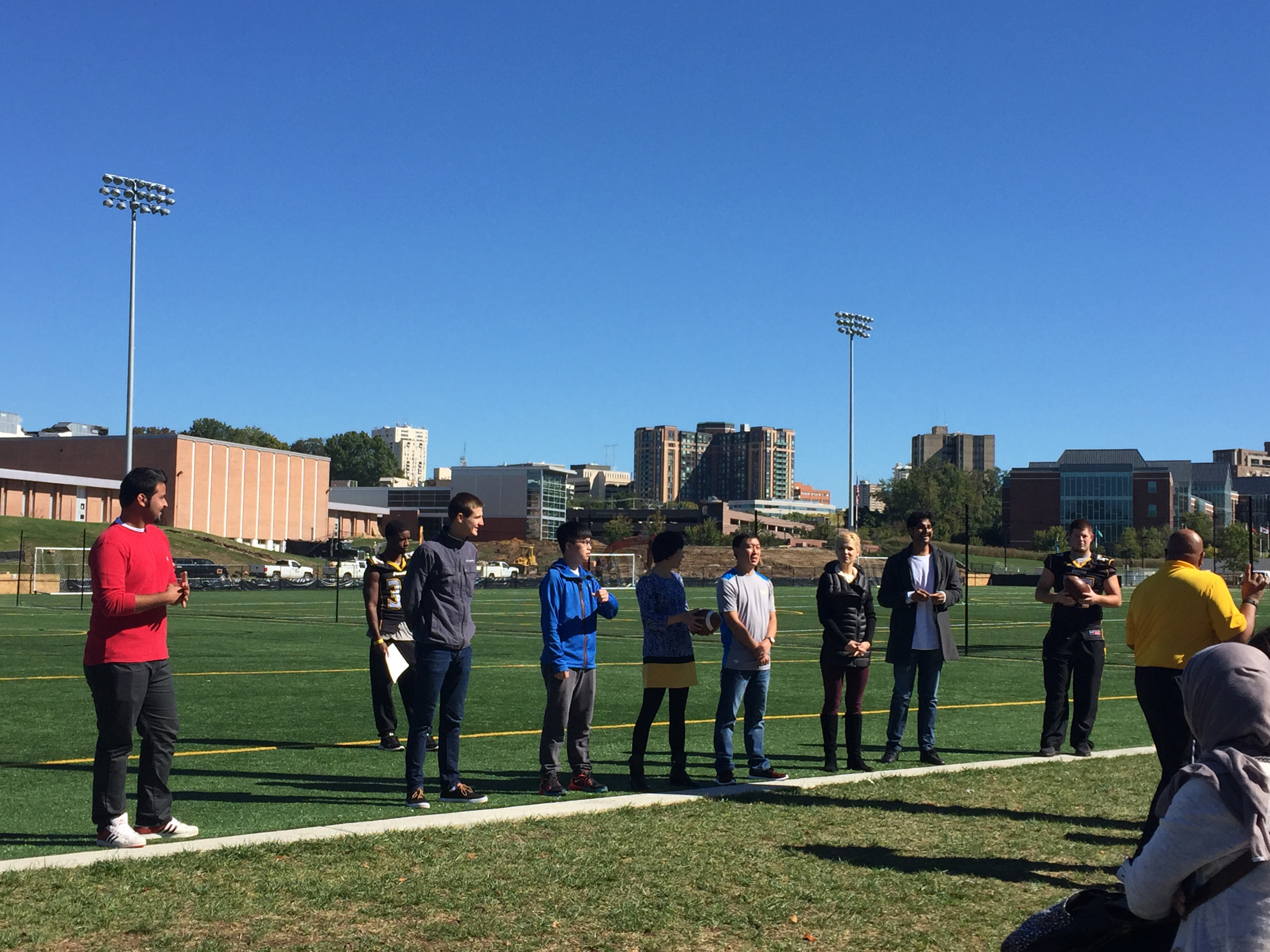 On a sunny Tuesday following a week of dreary, rainy weather, a handful of Towson students take their places on Burdick field in a starting formation. They face no opponent, and are dressed in casual clothes, but they are ready to play some American football.

First, however, they have to learn how to play.

As international students in the English Language Center (ELC) at Towson, they were not taught the rules of American football in their homes like most Americans.

“To them, football means soccer,” social coordinator for ELC, Anne Colgan, said. “These guys don’t have any idea about our number one national sport. So since they are here for a couple years, they should know something about it.”

With the help of President of the Black Faculty and Staff Association, Barry Evans, the ELC has been putting on this seminar to teach international students the game of football for the past 20 years.

Evans first had the idea to begin this seminar after a conversation with an international student lead him to recognize that it must be difficult for these students to find topics of conversation to engage in with American students on top of the already present language barrier.

“I thought, what would be a way to increase the interaction between your average Towson University student and international students?” Evans said in an email. “Increase the interaction so that international students are in a position to hear more American English spoken; in addition to also being put in a position where they are talking with more American students.”

Evans began by describing the size of the field, explaining how the yard markers and goal lines work and how scoring is determined.

“The game is very difficult, it’s a hard game,” Evans told the students.

After giving his audience a quick quiz on what they had learned thus far, he asked for volunteers to help him introduce the different positions.

“I need somebody who’s tough,” Evans said while looking for a student to play center in his mock offensive line.

He filled in the various positions and, to much applause from those watching from the bleachers, called out professor Mark McTague of the ELC to step in as the wide receiver.

He had the ‘team’ gather into a huddle before simulating the start of a play.

“It’s time for you to be baptized in American football,” Evans said into a microphone to the audience. “Are you ready?”

The huddle yelled, “break” before starting a play.

“It’s a wonderful opportunity to introduce international students to a very important component of American culture,” Evans said of the seminar in an email. “It’s a chance for them to join in one of the activities that a lot of Americans participate in, a chance to feel part of the place that is going to be their home for conceivably the next couple of years.”

After a couple of students were able to try on the large pads that players must wear during the game, the Towson football players lead students in a number of running and passing drills before breaking into teams for a few scrimmages.

Zizo Batobara, a 25-year-old student from Saudi Arabia, said that the event was good and that he learned a lot about football. Particularly that, in football, players get to tackle their opponents.

“We told them that it was two-touch, you know once you get touched you are down, but they kept on playing and kept tackling,” redshirt freshman Brandal said. “They were just really excited to play.”

Brandal was enthusiastic to take part in the seminar when Director of Football Operations, Lance Yaniger, asked him if he would help.

Brandal and Yaniger said that they hoped this seminar would encourage more international students to attend football games, in particular this Saturday’s game against James Madison University.

“We need a big crowd to come,” Brandal said.

Out on the field, students throw footballs across the field to one another, amidst haphazard tackles and runs into the imaginary end zones.

One student catches a ball and takes a few steps forward before thinking and turning to run the other direction for a touchdown.