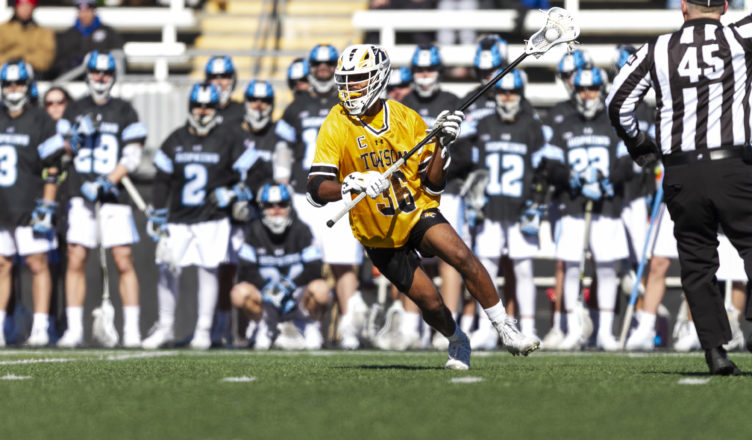 On a chilly and windy day at Johnny Unitas stadium, the No. 7 Tigers looked to end their losing streak against the No. 13 Denver Pioneers. But the Pioneers downed the Tigers in a heartbreaking fashion, 7-6.

“It was a pretty even game for the most part, ‘ said sophomore midfielder Koby Smith. “We had a few too many turnovers throughout the game, and we let the lead slip away from us.”

The game started off at a slow pace, with neither team finding the back of the net through the first nine minutes. After that, the two teams would exchange goals until halftime, with the score tied at four, despite the fact that the Pioneers outshot the Tigers 20-10 in the first half.

For the black and gold, turnovers that have caused headaches in the team’s game plan in recent weeks reappeared on Saturday.

The turnover concerns spread to the goal as well with Denver scoring a goal off of save by junior goalie Tyler Canto. Canto’s save deflected off of a Towson defender and went in the net.

“Little things we can work on and definitely improve on,” Canto said. “That’s something we’re definitely going to work on, for sure.”

Canto did his best to keep Towson in the game with 11 saves.

The second half started out well for Towson as senior attack Brendan Sunday and senior midfielder Timmy Monahan scored the only two goals in the third quarter as the Tigers went into the fourth quarter with a 6-4 lead.

Ultimately, it was the final stanza that determined Towson’s fate. A controversial no-call on what could’ve been a possible crease violation saw the Tigers’ lead cut to one just 77 seconds into the fourth quarter.

“[The referee] said his feet weren’t airborne when he batted at the ball.” said Head Coach Shawn Nadelen, explaining why the officials didn’t take the Pioneer goal away for a dive into the crease. “It’s a call in the game. You gotta live with it and move on. We definitely had opportunities.”

After the non-call, Towson’s defense gave Denver’s offense more problems with a stingy double team while forcing the Pioneers to take low-percentage shots around the net. Despite the strong defensive pressure, the Pioneers tied the game at six with 4:48 remaining.

The lack of an offensive threat from Towson made regaining the lead a difficult task as the Tigers could only muster five shots in the fourth quarter.

Denver took the lead with 1:13 remaining in the game and Towson could not respond, suffering its third straight loss.

The Tigers look to end their losing streak on Saturday, March 30 in the team’s first conference game of the year. Towson will host the Hofstra Pride at Johnny Unitas Stadium at noon.

The game can be streamed for free online on the LAX Sports Network.