So far in the 2019 NFL season, the Baltimore Ravens have surprised many with their performance. Offensively they are playing as well as anyone in the league. Quarterback Lamar Jackson has gotten off to a strong start, and Ravens fans are starting to believe he’s their franchise quarterback. After their week six 23-17 win vs the Cincinnati Bengals, it seems to be a fitting time to look at how legit Baltimore is as a contender.

Offensively, they’re as good as anyone

As of week six, the Ravens are fourth in the NFL in total offense with 2,207 yards. With 441 yards per game, they are producing as well as any offense has through five games. The rushing attack has more than 100 yards than the Minnesota Vikings who are second in total rushing. I can’t remember an offense that dominated the ground game this much this early in the season. Heading into the season, head coach John Harbaugh said this would be a revolutionary offense.

In an interview with NFL Network, Harbaugh said, “The game was probably revolutionized with Bill Walsh and Joe Montana. What’s the next era going to be? We’re about to find out.”

It’s hard to say it’s revolutionary, but it’s also hard to dispute the success it’s had. The schedule only gets harder, but if they can keep up the success there’s no telling what they’re capable of.

For once, the defense is the concern

Baltimore has always been known for their defense, but this year, the defense has been the problem. Ever since I started watching football, the Ravens had one of the best defenses so it’s surprising to see them struggle. Through four weeks, the Ravens ranked 22nd in total defense, giving up nearly 400 yards per game.

If there’s a reason why the Ravens could end up missing the playoffs, it seems as if the secondary could be the main one. They have time to improve, but the schedule is yet another challenge for the unit.

The schedule does no favors

Starting in week seven, the schedule becomes much more difficult for Baltimore. After a game vs the Cincinnati Bengals, Baltimore faces the Seattle Seahawks before their bye week. Coming out of the bye the Ravens face the New England Patriots, followed by the Bengals on the road.

They get the Houston Texans before traveling to Los Angeles to face the Rams. They come back to the east coast vs the San Francisco 49ers, Buffalo Bills, and New York Jets. To finish the year, they head to Cleveland for a rematch with the Browns who just beat them 40-25 at home.

The final game which could have playoff implications is at home vs the Pittsburgh Steelers. This schedule is not going to be easy, and if they can make the playoffs it will be an impressive feat. The good news for them is other than the Patriots and Kansas City Chiefs, there hasn’t been a clear contender in the AFC.

It will be interesting to follow Baltimore this season and will be a great test for this young, up and coming team.

Are they legit contenders?

At this point in the season, it’s too early to say if the Ravens are contenders. Offensively, if they can keep up the same production, they have a chance. But it will come down to the defense stepping up and making plays in key situations.

They have finished out close games which could be important later in the season. There’s still a lot of football left to be played and Baltimore hasn’t done enough to prove that they are a legitimate contender to play in Miami in February. 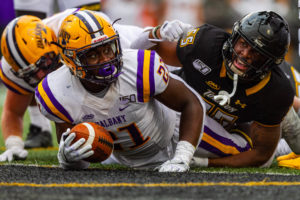