Towson earned a 7-4 win in the second game of a doubleheader with Colonial Athletic Association (CAA) rival Charleston at Schuerholz Park.

Freshman Cuinn Mullins started the attack with a two-run home run. He went 1-for-3 at the plate with one run scored and three RBIs.

In the third inning, junior Colin Dyer hit a triple, the second of the day and a CAA-leading sixth of the year. Dryer finished the game 1-for-3 with two runs scored.

“It’s huge, it’s one of our biggest struggles getting production from our five through nine guys,” Head Coach Mike Gottlieb said. “Our one through four are about as good as anyone in the conference, but when we get hitting through the lineup we’re pretty good.”

Senior Austin Clark (1-3) picked up his first victory of the season allowing only one hit in 1.1 innings.

Sophomore David Marriggi (2) pitched three shutout innings to earn his second save of the weekend.

“Going into the weekend we weren’t sure who our closer would be,” Gottlieb said. “He [Marriggi] came out of the bullpen for the first time as a closer, he did well.”

In the first game of the doubleheader Saturday Towson fell to Charleston 9-4.

The Tigers trailed 6-0 at the end of the sixth inning, and the deficit proved to be too much to overcome.

Junior Kevin Ross (2-6) allowed six runs, only two of which were earned, on 10 hits in six innings of work.

Towson only managed six hits in the game, with six different players registering one hit apiece.

On Friday, it took the Tigers a three-run eighth inning to come from behind and win 4-3 to open the weekend series.

Junior Brady Policelli was the hero hitting a game-winning two-run triple. It was his only hit of the game as he went 1-for-4 with two RBIs.

On the mound, Marriggi struck out two of the Cougars three hitters in the ninth to earn his first save of the season.

Freshman Skyler Morris built off his strong showing last week allowing only one run on six hits in 5.2 innings of work. However, junior Matt Golczewski (3-1) received the victory. He gave up just two runs, only one of which was earned, on four hits in 2.1 innings.

Saturday, Gottlieb was honored by numerous alumni for his 700 career wins.

“One of my former players, we were at odds,” Gottlieb said. “He wasn’t great at academics. He told me that he just got his degree and how much he appreciated me as a coach. You wouldn’t have known that the four years he was here. It was nice.”

Following its game against the Terrapins, the Tigers hit the road to play at CAA rival William & Mary for a three-game series starting Friday, May 6, at 6 p.m. 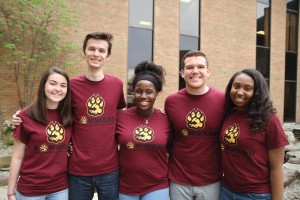