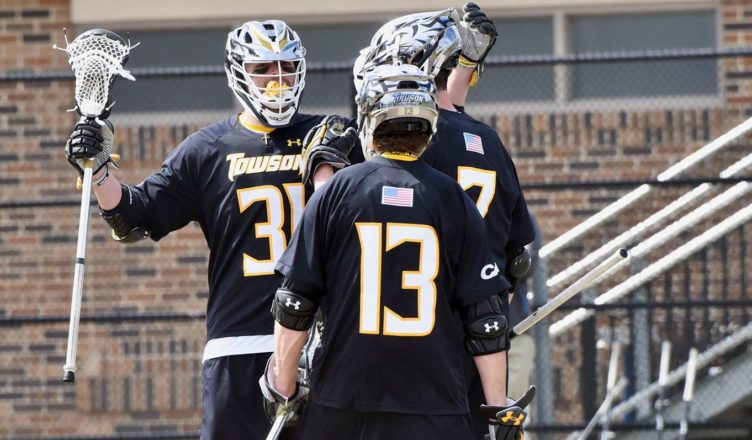 The Tigers fell in a tight 12-10 contest against the No. 2 Duke Blue Devils in Durham, North Carolina on Saturday afternoon.

“The biggest thing for us moving forward is playing smarter, cleaner, more efficient lacrosse,” said Head Coach Shawn Nadelen. “We’ve got good experience all over the field, we just can’t put ourselves in a  position to beat ourselves. Unfortunately, we did that Saturday.”

Towson (5-2)  and Duke (7-1) played a back-and-forth game in the first three quarters as each team netted two goals in the opening stanza.

Senior midfielder Timmy Monahan received a pass from senior attackman Brendan Sunday and gave the Tigers a 3-2 lead less than one minute into the second frame with a fade-away shot that went from high-to-low, giving the senior his eighth goal of the season.

The Blue Devils responded with a 3-0 scoring run that started less than five minutes later to give the home team a 5-3 lead with 7:35 left in the half. Monahan answered back on a man-up opportunity.

Senior midfielder Grant Maloof faked a shot from about 15 yards away from goal before passing to Monahan, who ripped a shot in the top left corner to cut the deficit to one.

After conceding a goal to put Duke up 6-4 with 2:37 left to play, Towson kept up its offensive pressure. Sophomore midfielder Greg Ey notched his first goal of the season when he blew by a defender and fired a shot in the far top corner.

Sunday scored 52 seconds later, diving toward the side of the cage and finished low, far side, just above the goalie’s leg. Both goals came with under two minutes before halftime, knotting the score up 6-6 at the break.

Towson started the second half strong as Sunday tallied his third goal of the afternoon six seconds in off a transition feed from senior midfielder Alex Woodall. This marked the first time that the Tigers held a lead since Monahan’s goal early in the second quarter.

Woodall had an impressive day in the faceoff circle, winning 19 of 24 on the day.

Towson added to its lead with good ball movement as junior midfielder Brody McLean dished it to senior attackman Nick Delbene, who notched his first goal of the 2019 campaign.

Turnovers proved costly yet again as Duke netted four unanswered goals to take a 10-8 lead in the fourth quarter.

“I thought we had allowed the game to get away from us in the fourth quarter with some careless mistakes,” Nadelen said. “The clearing game and decision-making off the face-off, that’s where the game really came back to haunt us.”

Sunday cut the deficit to just one when he swam dodged left to right to left before shooting high to low where the ball bounced right by the mesh of the goalie’s stick and into the net with 5:59 left.

But a pair of Duke goals sealed Towson’s fate before Sunday added his fourth and his team’s tenth goal of the game with 19 seconds on the clock.

The Tigers head back home on Saturday, March 23 to open a two-game homestead where they will face the No. 13 Denver Pioneers at Johnny Unitas Stadium at noon.