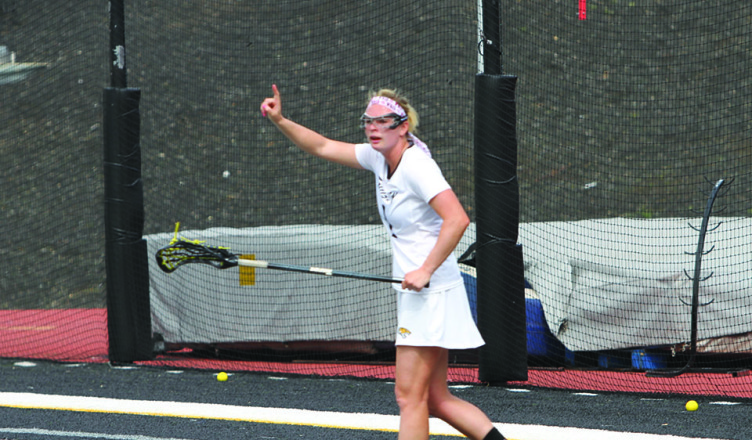 Samantha Brookhart takes pride in being the quarterback of the 29th most efficient offense (at The Towerlight’s press deadline) in the country. The Towson senior attacker broke the single-season assist mark of 43 by recording four helpers in the team’s 18-5 win over Johns Hopkins Sunday.

In Towson’s Colonial Athletic Association (CAA) semifinals game against Elon Friday, May 5, Brookhart has the opportunity to shatter the school record for career assists. She is just two helpers shy of breaking the 91-mark plateau.

“I’ve always considered myself more of a giver than a receiver,” Brookhart said. “I just love seeing the joy of giving an assist to my teammate who scores, especially when you’re giving an assist to a first-time goal scorer. It’s the most amazing feeling you could ever have.”

Brookhart’s journey to Towson began at Mount Hebron High School in Ellicott City, Maryland. She was a four-year varsity starter and tallied 132 goals, 103 assists and 211 draw controls throughout her career.

The numbers throughout Brookhart’s time at Hebron earned her U.S. Lacrosse and Under Armour All-American honors and team MVP honors in her junior and senior years, respectively.

Lacrosse wasn’t the only sport that Brookhart excelled at, however. She also played basketball and field hockey. In field hockey, Brookhart was a two-time all-county selection and earned team MVP honors in her senior year.

Despite Brookhart’s extensive athletic career in high school she followed lacrosse, joined Towson’s program in 2014 and received a start in the team’s first game as a true freshman.

“My high school coach pulled me into her office and said, ‘I don’t know if you’ve been thinking about college recently,’ meanwhile my club coaches made us do a list of schools,” Brookhart said. “Towson was on my list, after visiting the university there was so much potential I just wanted to be a part of that.”

In Brookhart’s first season in black and gold, she  appeared in all 19 games, helped lead the team to a conference championship and made the CAA All-Rookie Team.

A year later, Brookhart crushed the myth of the sophomore slump. In her second year with the team she appeared in every game and finished second on the team in points and assists with 30 and 19, respectively.

Last season, Brookhart played a key role in Towson’s run to another CAA Championship and a win in the NCAA Tournament. In the team’s postseason run she recorded 10 points, seven assists and three goals.

While Brookhart’s career at Towson coming to a close, she wants to help her teammates find the will to win another Conference Championship and make an appearance in the NCAA Tournament.

“The mindset of a college athlete is wanting to win rather than needing to win,” Brookhart said. “We have a ton of great players on our team both offensively, defensively and our midfield. This talent can take us very far into the NCAAs and I’m really looking forward to that happening.”