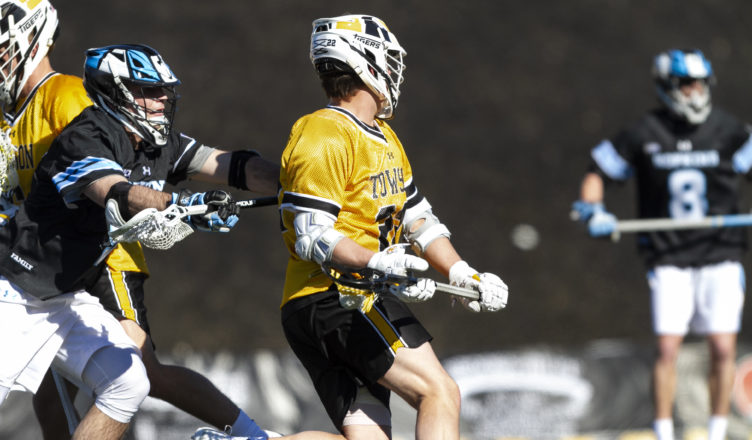 In the time since last year’s meeting between the Tigers and Johns Hopkins, Towson (0-1, 0-0 CAA) has seen a noticeable change in player roles, roster names, and strengths to the program.

Over the course of last year’s match-up, senior midfielder Alex Woodall won 21 of 28 faceoffs — many of which led to fast-paced offensive opportunities in transition which the Tigers used to their utmost advantage en-route to a 17-8 victory over the downtown visitors. Woodall would go on to win the most face-offs as a Tiger with 583.

In this year’s contest, that role was primarily handled by senior midfielder Jack McNallen. McNallen, who gained some valuable experience last season when Woodall went down with a wrist injury late in the season, went 6-23 on face-offs Saturday afternoon in a contest which the Blue Jays (1-0, 0-0 Big Ten) would pull away in the fourth quarter, defeating Towson, 15-7.

“I didn’t think we did a good job of playing team lacrosse today for a large part of it,” head coach Shawn Nadalen said. “And when we do that against a good team, playing Hopkins, they’re gonna take advantage of it.”

After finding themselves down 5-1 after one quarter, the Tigers transition offense found its rhythm in the second. After an initial five-minute long stalemate to introduce the second quarter, Senior attacker Brody McLean, and senior midfielder Jake McLean each scored a goal, and it cut the deficit to two goals.

Before they closed out the half, Towson added one more tally from senior midfielder Jon Mazza, cutting the score to 6-4.

“Obviously, we had issues at the ax and off the ground all over the field,” Nadalen said. “And that obviously led to a lot of possessions. We weren’t playing well enough at either end of the field to neutralize that, so obviously we got a lot to pay attention to and a lot to work on.”

The start of the third quarter looked like a completely different game for the Tigers. Junior defenseman Koby Smith’s offensive rushes drew Hopkins defenders away from their opponents and towards the pre-season USILA All-American. This freed up sophomore James Avanzato to score his first goal of the year on a high-heated shot on the run across the front of the net.

Not long after, Smith would add his second goal of the game off a cross field pass from McLean to tie the game at six.

“I think our team as a whole has worked more on transition and moving the ball getting better at our clearing games,” Smith said. “Our clearing wasn’t very good last year, that’s something our team is striving to get better at.”

This would be the high point for Towson on the score sheet, however, as Johns Hopkins would hold the Tigers offense scoreless for over 13 minutes and score four unanswered goals before Mazza’s second goal of the game would get Towson back to within three with 18 seconds remaining in the third.

Mazza made his first appearance since 2018, scoring two goals on five shots.

“It took me a little bit,” Mazza said. “I had a rough third quarter, had to take a seat out for a little bit but the first game back felt good. But we lost, so we failed.”

The fourth quarter was all Blue Jays, whose long, drawn out offensive possessions kept the Tigers off the scoreboard in the quarter, as Johns Hopkins went 4-0 against Towson in the final frame.

“We obviously had some breakdowns in the zone even though we’re sticking with it,” Nadalen said. “Some of that came through on the longer possessions unfortunately and sometimes that wears you down mentally.”

The Tigers welcome back redshirt senior midfielder Grant Maloof to their lineup on Saturday, Feb. 15 at noon as Towson returns to Johnny Unitas Stadium to host Mount St. Mary’s for their home opener.