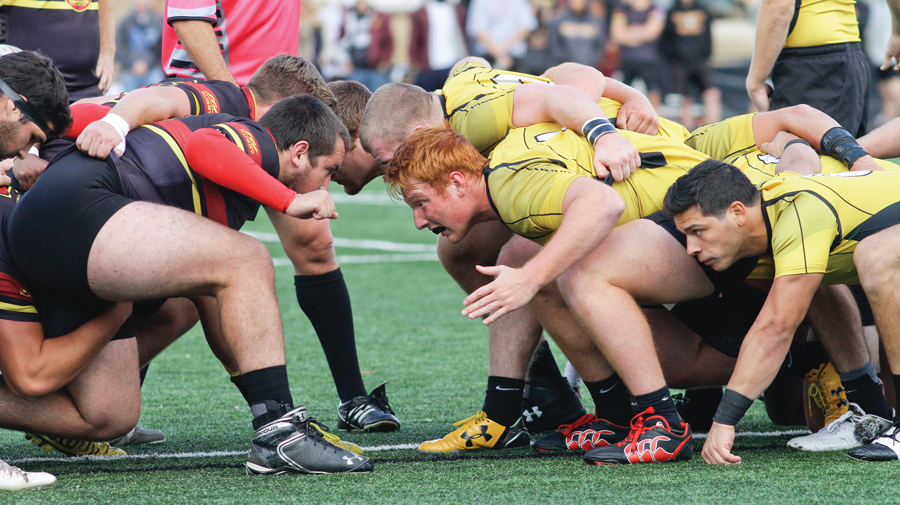 Some students go to college to pledge a fraternity. Some run for positions in their university’s student government association. And other men join the rugby team.

The single, oval-shaped leather ball does more than just get tossed around. It unites roughly 50 men into a culture, a bond and a brotherhood.

For Tim Shields, the word “brotherhood” has literal and figurative meanings, as he and his brother are both members of Towson’s men’s rugby team.

“Me and my brother are really close, he plays outside center and I play wing, so we have a connection on the field that has been in the making since we were little,” Shields said. “The guys I’m not actually blood brothers with and the guys I came up in the ranks with since I was a freshman are the closest friends I’ve ever had in my life.”

After this weekend’s win against Salisbury, the team is 6-1 for regular season, and 2-0 for postseason.

The love of the game is strong, but playing alongside one another is what these players thrive on. Teammates have each other’s backs on and off the field.

“We play for each other because I know when you see someone go into a tackle, and you know someone is going to try and take the ball from them, you’re immediately there over top of them taking hits from the other team just to protect your guy with the ball,” senior member Tyler Honeycutt said.

For Honeycutt, the brotherhood within the team has had the most impact on his life.

“No matter where you go you have a boy with you and he’s always by your side,” he said. “I can look back and realize I’ve always had someone to lean on no matter what it is, and I know I’ve been there for plenty of people.”

The team conditions together twice a week, practices on field twice a week and says they love every minute of it. Even when players might need a break and don’t want to play anymore, they can’t walk away.

“I think the thing that it comes back to is the intensity,” senior member, John Schuberth, said. “Every time I think I might stop playing I always have a draw to come back, it’s almost like it’s an addiction.”

Even outside of the team, Schuberth said, the men are all close friends and support one another.

“You form relationships playing this more than in any other sport I ever played,” he said. “Something about the game just draws us together and builds a special bond.”

The sport of rugby is intense, and is unlike its cousin sport football because of the fast paced nature of the game. Yet, it’s that exact style of game play that the players love most.

“Practice is intense, more intense then I’ve had in other programs,” junior member, Anthony Bria, said. “When I played football in high school it was more relaxed, rugby practice is different, everyone comes out and it’s intense.”

No different than any other team or school, players will come and go, but the bonds teammates have formed will be with them even past their time at Towson.

“These are the guys I came into college with and the same dudes I’ll be hanging out with after college too,” Bria said. “You play a sport and its cool, but if you’re not going to love your team it’s hard to play. That’s one thing I love about this team, I love every one of them. I’m part of a fraternity too, but sports is just a different bond.”

These brother-like bonds have fueled the team to play with inspiration all season long.

“It’s not about just being the star player it’s about being a part of something bigger than yourself,” Shields said. “We have someone on our team that is battling a sickness right now and he’s what we’re playing for this season. He’s our incentive this year to go as far as we can.”

Towson defeated Salisbury 13-10 in a close, gut wrenching game to win its first ever Potomac Rugby Conference Championship Saturday, Nov. 7 in Severna Park. This victory avenged a 36-13 loss from earlier in the season on Oct. 17.

The Tigers are ranked 5th in the nation, and will move on to play in the national playoffs Nov. 20-21 for the fifth straight year.

The brotherhoods formed throughout the team are like tattoos, they said, it’s going to be with them forever.

“One hundred percent [this sport], has changed my life for the better,” Honeycutt said. “I’ve got it tattooed on my leg.”