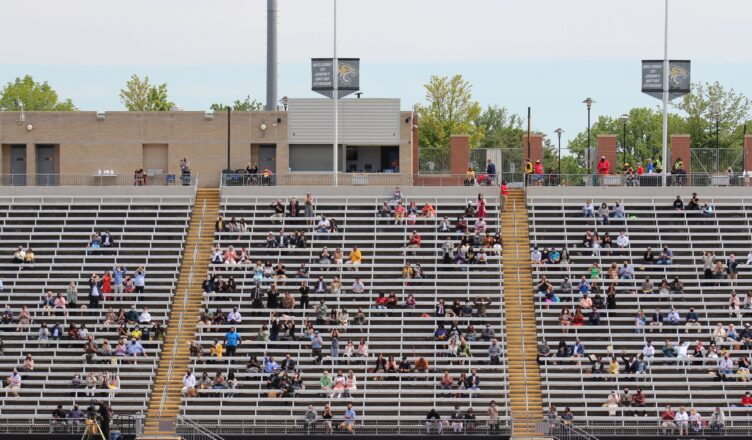 In line with their decision to have in-person instruction in the fall, Towson University (TU) is planning to allow full capacity attendance at all sporting events next season.

The Athletics Department has already been given the opportunity to do a trial run for what full capacity might be like next year. On March 10, Gov. Larry Hogan announced that large outdoor venues could reopen to the public at 50% capacity. TU followed these guidelines, allowing 50% at outdoor sporting events.

Men’s Lacrosse allowed for the largest fan capacity cap this past season at 5,000 people in Johnny Unitas Stadium, while Women’s Lacrosse at Tiger Field held 300 fans. Baseball and softball could each hold 200 fans at John B. Schuerholz Park and the Tiger Softball Stadium, respectively.

According to Emily Costello, a fan development assistant for TU Athletics, while the University continues to plan for a return to campus next fall, TU will continue to follow local and CDC guidelines, which could mean changing fan capacity rules at any time during the seasons.

“So we are hoping that if it’s outside or inside our full capacity, obviously, we have to follow the guidelines of what [Gov. Hogan] says,” Costello said. “And then again, what university wants, but we’re hoping that it’s going to be full capacity.”

TU freshman Danny Florenzo says that he is excited to have the opportunity to attend games.

“Yeah, I’m definitely excited for that,” Florenzo said. “Especially since like, this year, as a freshman, I didn’t get the whole experience. And so next year, it will definitely for sure be a lot more fun.”

Travis Fuller, assistant athletic director for game day experience at TU, says the hardest part about planning for the upcoming season are the unknowns.

“My staff is operating as if things will be back to normal in the Fall, but with an understanding that everything is still very fluid,” Fuller said.

This year, student-athletes had tight restrictions on physical interactions with non-team members. Costello hopes these restrictions will ease or no longer be in place this fall.

“We’re just hoping to interact with our fans, hoping to create the experience for both our Towson community and our Towson student-athletes, and also having parents to be able to talk to their players after a game,” Costello said.

There have yet to be any protocols established regarding the vaccination status of non-fan attendees of sporting events. Costello says that the expectation is that all fans, whether they may be students, faculty, staff, or outside members, must be fully vaccinated, but nothing is concrete yet.

TU is looking to increase fan engagement by bringing back incentives for students. Costello says they hope halftime shows and activities are able to make a comeback next season, in the form of possible pee wee football games, or TU groups performing. Costello also wants to see giveaways come back during timeouts.

“We hope to be able to give out t-shirts, give out water bottles, and all that we haven’t been able to do this year,” Costello said.

Fuller hopes that the return of fans in sporting events will already draw fans back to the games, but they are also implementing programs to boost and promote fan attendance at games.

“We’re hoping that with the kind of lack of events and lack of entertainment that people have had over these past 14-15 months, that once the fall rolls around, people will be anxious to come to some of our Towson events,” Fuller said.

To promote fan attendance, Fuller says that TU Athletics will have a larger presence in heavily-trafficked areas such as the University Union, which is set to reopen next semester following its renovation and expansion. The larger presence will include both advertising specific sporting events, and promoting their social media pages to spread information about TU events.

Towson Athletics will also be searching for ambassadors on campus to promote student pride of TU sports teams. Fuller wants to connect with student leaders on campus to hear their opinions on how to improve both the game-day experience, and what they can do to attract more fans at games.

“I think it wasn’t necessarily that anything was bad, so to speak, it was more adding on, and how can we tweak things and make things better,” Fuller said.

Fuller says he and his team are looking forward to implementing their new initiatives next season and making the games “ … the best they possibly can be.”