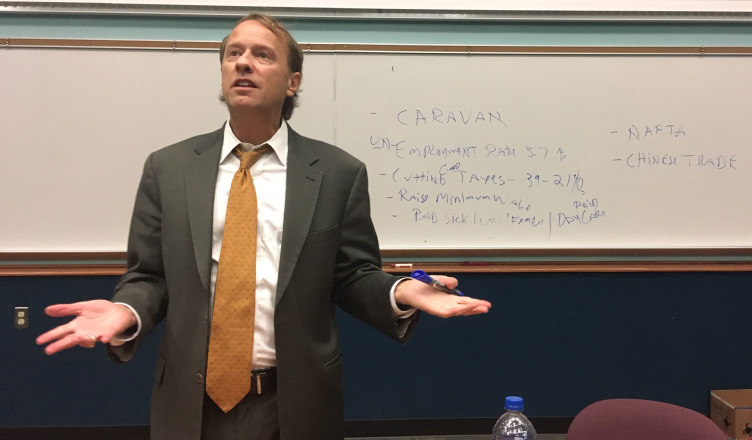 Maryland Senator Jim Brochin came to Towson last Thursday afternoon as a guest lecturer for Richard Vatz’s persuasion class in Van Bokkelen Hall to discuss with students an issue that had been weighing heavily on his mind over the last few weeks.

“I want to talk about Donald Trump today,” Brochin started. “I have this thing in my mind that he has a very good chance of being reelected and I want to give you some facts and opinions and see where you guys come across that.”

When President Donald Trump was first elected into office, Brochin went into shock and could not believe what had happened. He doesn’t think Trump believed it either.

“I watched mistake after mistake and misogynist comments against women and all the horrible things he said,” Brochin said. “And the horrific way he acts and the thing that’s coming forward, that almost despite himself, he is at the right place at the right time.”

Vatz, who was Brochin’s professor when he attended Towson University, said that Brochin has has been a guest lecturer for him twice a year for over a decade.

“He has always struck me as a politician with high integrity who has been punished for that quality by his own democratic colleagues,” Vatz said. “Including false political claims about him by his own Democratic opponent, Vicki Almond.”

When it came to his subject matter, Vatz did not know Brochin would be speaking about Trump until minutes before class began.

“I never have guest speakers clear topics with me, unless there is an unavoidably salient topic of the day,” Vatz said.

Though the senator does not like or support Trump, Brochin believes that there are policies Trump is putting into place that suit some issues the United States is currently facing, including the caravan of immigrants coming up through Central America.

The caravan, which left San Pedro Sula, Honduras on Oct. 12, is estimated to have as many as 7,000 participants. The caravan started with a grassroots social media campaign that criticized the Honduran president and is comprised of people looking to gain asylum in Mexico and the United States.

Trump plans to send active duty military troops to the border to provide logistical and technical support to Customs and Border Patrol in halting the progression of the caravan.

Brochin said that Trump’s actions to stop the caravan are good because, if let into the country, that number of people would harm jobs and minimum wage.

“The issue is that there are other reasons that people want to come in other than asylum,” Brochin said. “But the problem is this…if you open the border and let people in for for whatever reason other than life or death reasons…if you let everyone in for economic reasons, then you might as well kiss jobs and minimum wage goodbye.”

Brochin then added that Trump has dropped the unemployment rate to 3.7 percent and cut corporate taxes from 35 percent to 21 percent. The tax cut, the senator said, will go to encourage a higher minimum wage as companies are now able to pay more.

“By doing this, he got companies to take their capital, reinvest it, and you know, Walt Disney, Disney World, took every one of their hundred thousand employees and now you get a free college education if you work for Disney,” Brochin said.

According to Brochin, Trump has done this by shrinking the job market through immigration policy. Then when the market shrinks, wages increase.

“So they haven’t gone up yet, we’re working on it,” Brochin said. “But don’t count this president out about trying to fulfill a promise that he made on the campaign trail that I remember. And you probably remember also, that would make his reelection effort even more realistic.”

Brochin was also amazed by Trump’s ability to negotiate the North American Free Trade Agreement with Canada, and the development of the relationship between the president and Kim Jong Un, the leader of North Korea.

The way Trump has taken on China in a trade war also left him in awe. According to Brochin, the president has taken on the country in a way no one else would have.

Drew Shaw, a junior political science major, enjoyed the lecture though she would have liked to have heard more about local issues.

For Shanice Christian, a communication studies major, the biggest take away from the lecture was to look at people’s actions more so than their words.

“Personally, I don’t like Donald Trump,” Christian said. “But seeing all of the things he has done kind of changes my perspective a little bit, and seeing that [Brochin] feels the same way I do but was able to explain to us that ,besides being the president look at everything he’s doing for us. Besides his personality, it’s in favor of the american people. It kind of changed my perspective.”