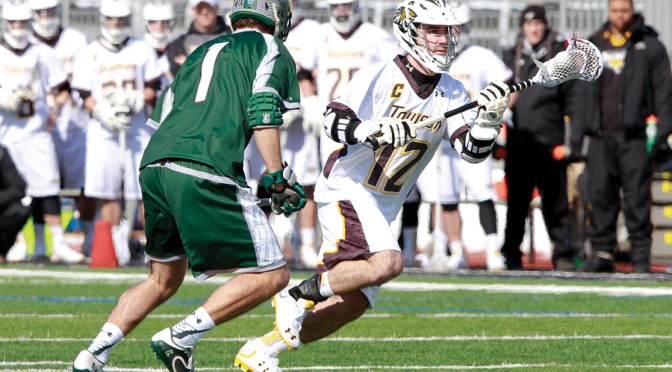 No. 17 Towson failed to complete its comeback attempt against the Drexel Dragons and lost, 11-10, dropping the team to the third seed in the Colonial Athletic Association tournament.

“I was real proud of our guys on their effort at the end,” Head Coach Shawn Nadelen said. “It was a situation we shouldn’t have been in but I asked for more out of them at halftime and to play how Towson lacrosse should be played and they responded.”

The Tigers began their rally with a man-up goal from redshirt senior attackman Max Siskind and sophomore midfielder Mike Lynch added a goal of his own a minute later which cut the Dragons’ lead to 7-4 with less than 12 minutes left in the third quarter.

Junior midfielder Ben McCarty took over for the Tigers after that, scoring three straight goals, which tied the game at 7-7 three minutes into the fourth quarter. Siskind scored his second goal of the game 35 seconds later and gave the Tigers an 8-7 lead.

Drexel had two straight goals to regain its lead but Siskind scored once again to tie the game at 9-9.

The Dragons went on another two-goal streak though and had an 11-9 lead with four minutes left in the game.

Senior midfielder Justin Mabus scored off an assist from sophomore attackman Ryan Drenner and cut the lead to 11-10 with less than three minutes left.

However, the Tigers managed just one more shot the in the last three minutes and couldn’t tie the game.

McCarty led the team with four goals and Siskind had three goals. Seider also had a goal in the first quarter and finished the regular season with a team-leading 27 goals.

“Any team is going to be difficult when you have to face them two games in a row,” Nadelen said. “They’ve played well against us and we’ve made our mistakes but they’ve also made their mistakes against us.”

The winner of the matchup will play against the winner No. 1 seed Fairfield and No. 4 seed Massachusetts in the CAA Championship game.

“We need to be more efficient and shoot more efficiently,” he said. “Alec (Burckley) needs to continue to do well at the face-off and we have to hold opponents down defensively. We need to show competitiveness and come out with passion and confidence.”

The Tigers face-off against the Dragons on Thursday at 4 p.m. at Fairfield University.