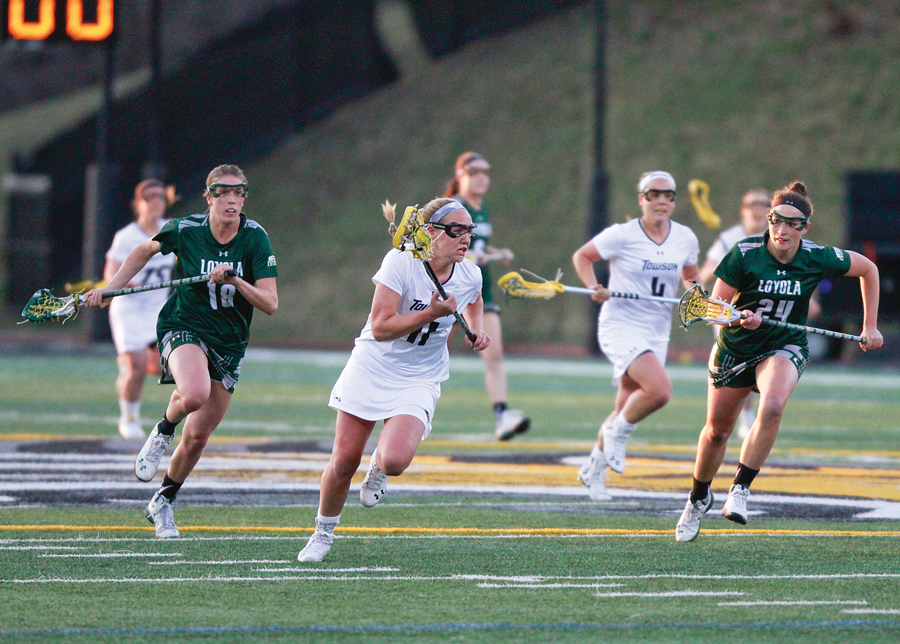 It happened again. Less than two weeks after senior attacker Andi Raymond’s game-winning goal against Hofstra was called back in overtime, a similar scenario played out on Towson’s Senior Day on Saturday at Johnny Unitas Stadium.

In a 10-10 game with three seconds remaining, Raymond fired a shot past Johns Hopkins goalie KC Emerson for what Towson thought was the game-winning goal. However, a shooting space call on Johns Hopkins negated the goal and the game went to overtime.

“It’s a tough call,” Head Coach Sonia LaMonica said. “… I was arguing that, at times, teams’ strategy is to kind of step into shooting space intentionally because they want to have the foul to call back the goal. It’s part of the game. It’s a frustrating situation to occur when you break through and you score. It definitely feels like you’re getting hit in the gut.”

Johns Hopkins scored with 1:18 remaining in overtime and made a game-winning defensive stop on sophomore midfielder Samantha Brookhart with less than 10 seconds remaining to seal the win.

“Those are just some of the challenges that we’ve had to see this season,” LaMonica said. “We’ve got to keep fighting at the end of day and use this game, as much as it hurts. I have a lot to be proud of with this particular team and the seniors. We’ll use it as motivation moving forward.”

Johns Hopkins took an early 2-0 lead just over five minutes into the game.  Attacker Jen Cook scored from close and midfielder Shannon Fitzgerald converted from father out to give Johns Hopkins the advantage.

Towson responded quickly, though, scoring two goals in the next four minutes to tie the game. Senior attacker Sarah Maloof had both goals, with the second coming off an assist from fellow senior attacker Andi Raymond.

The assist moved Raymond to 200 points on her career, making her the fifth Tigers player to do so.

Fitzgerald wasn’t in the celebratory mood, though, making her way down the field and beating Towson goalie Kelsea Donnelly to give the Blue Jays a 3-2 lead just 13 seconds later.

The lead was brief, however. Less than a minute later, freshman midfielder Emily Gillingham got a pass from Raymond in front of goal and tied the game at 3-3. After the teams traded chances, sophomore attacker Gabby Cha beat Emerson to give Towson its first lead.

The back-and-forth game continued when Blue Jays midfielder Dene’ DiMartino beat a Tigers defender and fired a shot past Donnelly. Maloof made it 5-4 less than a minute later, giving her a hat trick with 15:10 left in the first half.

“[Maloof] had a couple games pass where she was struggling within herself,” LaMonica said. “She just really took it upon herself to step up and break through. … I’m just really proud of the way she’s responded in the last couple games.”

Johns Hopkins added a late goal to tie the game going into halftime. The away team led, 18-14, in shots, but Donnelly made nine saves to keep the game level.

Donnelly finished the game with a career-high 16 saves on her Senior Day.

“I was kind of emotional when I first stepped onto the field because I realized this is going to be the last time I’m actually playing on this field in a game,” Donnelly said. “… I have to give a lot of credit to my defense because they’re keeping the shooters out and giving the angles that I want the shots at.”

Maloof opened the second half with her fourth goal, tying her career-high and giving Towson another lead. Four minutes later, the lead was gone after a goal from midfielder Haley Schweizer.

The Tigers controlled possession for the next few minutes, but couldn’t convert. However, Raymond gave her team the 7-6 with 17:05 left to play on a hard shot from the right side to beat Emerson.

Towson added to its lead with 12:22 left to play when freshman midfielder Kaitlyn Montalbano worked through a hole in the Johns Hopkins defense and scored from up close.

Towson took its first three-goal lead with 7:08 left in the game when Maloof tried to pass over Emerson in goal, but the ball hit Emerson’s stick and landed in the goal to make it 10-7.

The Blue Jays continued to press the Tigers defense, eventually making it 10-9 off another goal from DiMartino. Less than a minute later, midfielder CeCe Finney tied the game on a shot that beat Donnelly low.

Towson held possession over the last two minutes and Raymond made her pursuit with less than 10 seconds left, but had the potential goal called back.

The Tigers will now look toward the CAA tournament, where they will face the first-seeded Hofstra Pride with a chance to redeem the loss earlier in the season.

The game is set to start Friday at 4 p.m.