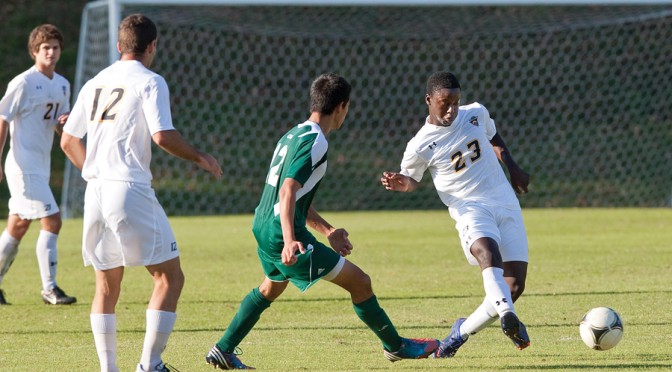 It has been just two years since Towson’s men’s soccer and baseball teams heard the news from President Maravene Loeschke, affirming that she was considering a recommendation made by then-Athletic Director Mike Waddell to cut their programs.

The recommendation, based on Title IX compliance, budgetary concerns and overall competitiveness, generated opposition from the supporters of both teams and began a five-month campaign to change the administration’s mind.

“When we first heard the news I felt extremely lost and unsure of my future,” senior pitcher Chris Acker said. “Everything I had worked for up to that point didn’t seem to matter and I had no idea what I was going to do. The feelings went beyond baseball because all of the friendships and relationships I had established at Towson.”

The final decision came down March 8, 2013, when Loeschke was escorted by police into a meeting with both teams to inform them that each would be discontinued at Towson.

Since that day, the men’s soccer and baseball teams have gone in very different directions. Baseball was saved, while men’s soccer was not and has dispersed across the country. Still, the question remains: How did these teams get where they are today?

“[The anger] has been settled”
Towson baseball played 16 games in 2013 with the idea that it was its last season. Fans and alumni gathered at many games to watch the Tigers, who wore tape over the part of the jersey that read “Towson.”

However, on April 1, 2013, it was announced that Governor Martin O’Malley had included $300,000 in his supplemental budget that would go towards keeping baseball around temporarily. O’Malley also approved another $2 million toward the construction of a new softball field, helping to strengthen the conditions for women’s sports under the Title IX rule.

Baseball Head Coach Mike Gottlieb said he was not a factor in O’Malley’s decision to save his team and not the men’s soccer program.

“Soccer losing the program, I was not happy about that,” Gottlieb said. “I had no say in it and no one ever consulted with me. The plan, as it turns out, was dictated I’m guessing from Annapolis. How they came up with this plan, I have no idea.”

Still, Loeschke said the team needed to raise $200,000 to keep the program alive through 2015. The fundraising started in May, when Towson found itself fighting for a CAA title.

The Tigers got the No. 4 seed in the CAA tournament and swept four straight games to win the conference championship and advanced to the program’s first NCAA tournament appearance since 1991.

“For me personally, [winning the CAA] in itself, regardless of the surrounding circumstances, was outstanding it its own right,” Gottlieb said. “… It was the first CAA championship we had ever won. What magnifies its importance, I guess, is the circumstances that did surround it.”

The team’s run to the NCAA tournament kickstarted a summer of fundraising that led it to reaching its goal as soon as December 2013.

The $200,000 guaranteed at least two more seasons for Towson baseball, but the future was still up in the air until Athletic Director Tim Leonard told the Baltimore Business Journal early this year that the program was “as permanently saved as any sport is.”

With 14 players remaining from that 2012 team that was cut and a new group of recruits that are promised four full years, Gottlieb said he doesn’t remind his team of the events that took place in 2012 and 2013.

“[The anger] has been settled,” he said. “There’s no sense staying angry forever. I think everyone looks back on it as unfortunate for a number of reasons. I think we’ve all moved forward and tried to make the best of it.”

“One team was gone and one team remains”
For the players of the 2012 men’s soccer team, the meeting in March of 2013 was the last chance they had to keep the program alive. Former Head Coach Frank Olszewski said even now, he’s not settled with the decision that was made and the months that led to it.

“There were obvious flaws in the process,” Olszewski said. “Even in the end, the fact that one team was gone and one team remains. For all the excuses that were made about Title IX was an issue and budgetary and things of that nature, the one that was let go had the least impact on those things, so just kind of puzzling. But I guess it is what it is.”

The decision meant that the over 20 former Towson soccer players had to decide whether to transfer to different schools and continue to play. Many decided to travel around the country to find another opportunity. This core group still had six players competing on college soccer teams this year.

This includes striker Olakunle Banjo, who decided to transfer to UMBC and play just a few minutes from Towson. Banjo led the Retrievers in points this year, scoring eight goals and adding five assists for a team that just won its third consecutive America East title.

C.J. Corey transferred to the Tigers’ former CAA rival George Mason, where he sat out in 2013 before playing this season. He said George Mason’s athletic department differs from what he experienced at Towson.

“I feel that George Mason’s athletic department is much closer with their student athletes, on a first name basis with most of them,” Corey said. “At Towson we never really got to know Mike Waddell.”
Other former Tigers elected to travel farther away to compete.
Goalie Felix Petermann started 13 games for San Jose State this season and Cameron Kidwell started the same at Utah Valley in 2014.

The only remaining Towson player competing in the CAA is Daniel Grundei, who scored three goals for the Pride.

Then, there’s the more than a handful that remain at Towson. Many have joined Towson’s club soccer team and continue to train with some of their former teammates.

His players may have dispersed from the Towson area, but Olszewski said they continue to keep in touch every week.

“We were a family,” he said. “Every player that came through that program knew that and that spirit still remains today. You can take the program away any way you want to, but that will never go away.”

Olszewski now works with U.S. Soccer, scouting for the U-14 and U-20 national teams. He said he would welcome the idea of coaching a Towson soccer team if it ever came back.

Athletic Director Tim Leonard could not be reached for comment.