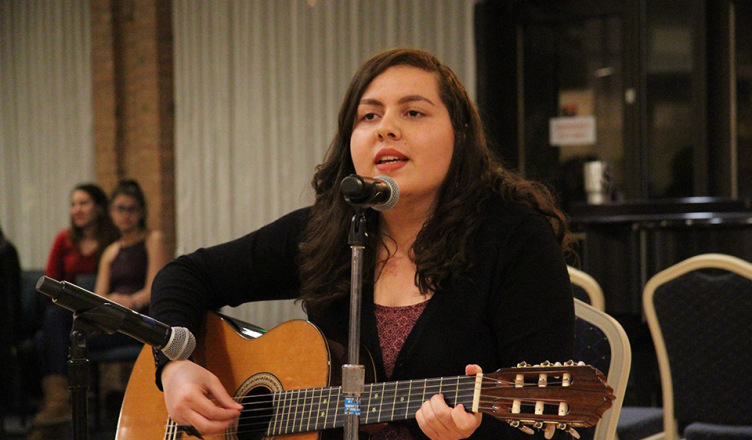 A night meant for the celebration of diversity and culture, Towson’s second annual CultureCon kicked off in the Potomac Lounge with music, lemonade, free T-shirts and student performances from groups like Lambda Theta Alpha and Pasión.

“[It] was sparked by us trying to find a way to meet the objectives of the core values that our Department of Housing and Residence Life has,” Residence Life coordinator and CultureCon planning committee member Antoinette Newsome said. “CultureCon was a way to really allow students and departments and many people on campus to display what culture means to them, in whatever way they define it.”

“Each table has a takeaway so that people can really learn about the culture that the organization is defining,” Newsome said. When asked what culture meant to her, she said, “I think culture really allows you to gain a deeper sense of knowledge based on your ethnicity, or gender, or another type of identity. It really allows you to kind of dive in and dig deep and be active in learning about what that means… It’s really awesome to see them bring what’s important to them to life through performances.”

Despite audio issues, performers like Priscila Wendt and the TREND Models were undeterred.

“It affected us on the inside but we couldn’t show it because we understand performing,” freshman model and EMF major Brianna Davis said.

After watching the footage of his club’s performance, sophomore and president of TREND Models Javon Wright was reassured. “We did have some music issues, but everybody kept going, and that’s the big thing,” Wright said. “If someone messes up or you make a mistake, just keep going and push through everything. That’s what they did today, and I’m so proud of them.”

TREND Models wore six-, seven- and even eight-inch heels for their performance — prompting freshman mass communication major Lindsey Tait  to plead for them to “Please step on me.”

The other modeling group to perform, Modelz of Distinction, wrapped up the night with a fierce performance that had members of the audience cheering and applauding. Jacqueline Ingutia, a sophomore criminal justice major, admitted that they were her favorite performance, but she enjoyed it all.

“Music is music everywhere you go,” she said. “Music still has a beat, and you can still enjoy it even if you don’t know it.”