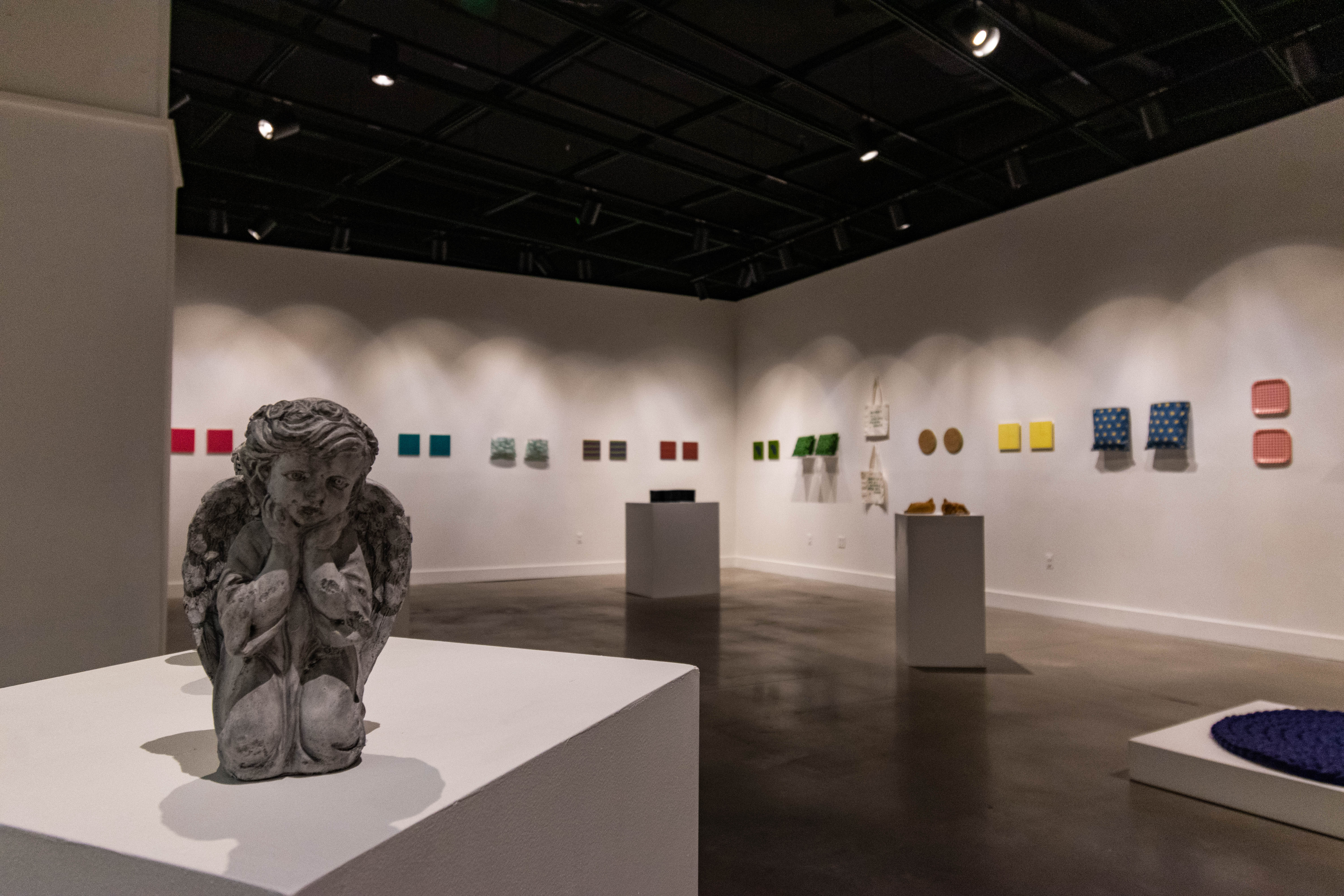 Bowlby is a guest artist to the university, and is based in Philadelphia. She is well-known for her drawings, prints, installations, and sculptures. With numerous years of professional artistry under her belt, and numerous fellowships awarded to her, it’s safe to call her an accomplished artist.

Sample(d)(r) was originally curated in 2014 at Gallery Joe in Philadelphia. The exhibit serves as a continuation onto a current project of hers, where she makes pairs of objects. The purpose of pairing objects is to reflect on how similar objects are not the same, and ponder what exactly “originality” is.

“When I set up an exhibition, it’s new to me as well,” said Bowlby. “It is a continuation of my studio work, just in an exhibition space.”

Walking into the exhibit, from a distance, some of her pieces may seem simple. Solid colored squares with simple circular or curvaceous patterns being examples. However, when you take a step closer, you notice the intricate textural patterns and strokes that make up the seemingly solid colored canvases. Furthermore, each piece stands in pairs.

“It started with a personal dilemma where I would make a drawing, and really like it, and it would sell,” said Bowlby. “But somehow, not having the actual drawing vs. having a photograph wasn’t the same, and was problematic for me because I kept making [it] over and over. The pairs are more like doppelgängers, some more exact than others, both good enough for me.”

The exhibit also featured some of Bowlby’s prints. Most were presented on pillow covers and clothing articles.

According to Bowlby, her inspiration for the exhibit as a whole pulled partly from the art piece, “Treachery of Images” by Magritte. This French painting features a pipe, with french text below it that reads, “this is not a pipe.”

One of her works inside of the exhibit features a “2’ x 4’” with the text “unreliable” painted across it.

According to Isaacs, curating the exhibit took two years of planning, collaboration, and set up. She hopes that students will enjoy visiting.

“I think that the arts are very important in helping us understand our world,” said Isaacs. “I believe that art changes lives and it is a part of a full education, and this is why the school has arts and humanities. The arts and humanities together are very important in shaping people’s minds, creating new ideas, discussing, questioning, and thinking about the world we live in. I think this is a really fun exhibit for the students.”