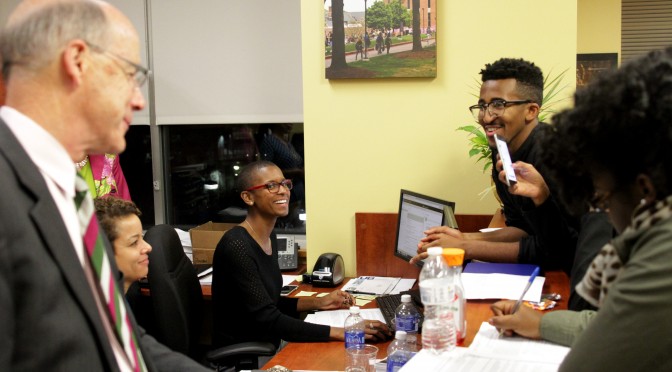 Towson University Interim President Timothy Chandler has signed a document affirming his intention to actively address or advocate for a list of demands, brought to him by a group of black students, after roughly nine hours of negotiation and deliberation today.

Students, administrators and university legal counsel went over the document line by line, and oftentimes word by word, discussing what Chandler could or could not sign. The final, agreed-upon document can be viewed here.

Students staged a sit in, and stayed in the office until they were satisfied with a response from the University.

Ultimately, the demands were fully revised twice before both parties were satisfied. The students took time to regroup and refocus to ensure that their demands were agreed upon by all present.

(Our image gallery may take a few moments to load. We promise it’s worth the wait!)

Among the list of demands signed by Chandler are increasing the number of tenure and tenure-track black faculty, ensuring every department has meetings devoted to cultural competency, requiring that policing practices are equitable for events put on by black student groups and events put on by white student groups, and advocating for the establishment of a course requirement in American race relations.

According to the document signed by Chandler, “in the event that [he does] not keep [his] promise and begin to address these concerns, [he] will resign as president of this University for failing to effectively represent black students.”

“It was a long and very, very important process that we went through both learning from each other and I think putting the University in a better place in terms of understanding and appreciating their problems,” Chandler said.

Today’s protest comes after a group of concerned black students staged a “SGA Takeover” during the Student Government Association’s Nov. 17 meeting. During the meeting, students demanded that SGA President Kurt Anderson sign the original draft of the list of demands Chandler signed.

“I think that this was really good and really productive,” Anderson said after the meeting. “We’re committed to ensuring that all Towson students, including our students of color are represented fairly and equally, and we’re going to work with administration to ensure that all of these issues are addressed.  This is something that we take very seriously.”

Anderson agreed to sign the document, and the SGA approved the motion by a vote of 20-3-1.

“I realize that there is a lot of work to come, but I feel like I am going to celebrate today and yesterday’s victory because I do see it as a victory,” student activist Breya Johnson said. “As a person who is committed to mental and emotional health on this campus, it’s nice to see that we have staff on our side and people on our side committed as well.”

Yahwon and Gillespie said that they were glad to have been able to come to an understanding and sign off on the list of the demands. However, they plan to continue to challenge the administration and Chander in order to deconstruct the systematic issue they said is currently in place at TU.

“What this is, 100 percent, is love,” Gillespie said. “Love for the institution, love for eachother, love for the embetterment and the comfortability of this campus for all students. When we decided that we were going to do this with rage in our bodies, it’s the rage that a parent feels when their child is not getting treated properly. It’s a rage of love.” 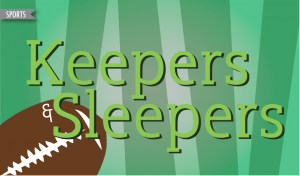