Rob Ambrose returned to his alma mater in 2009 to take over as head coach of a struggling Towson football program, a program where he once played and began his coaching career as an assistant.

“I had been removed for so long,” Ambrose said. “I knew we were bad, but I didn’t have any boundaries in what I thought we could be and should be.”

In Ambrose’s first two seasons as head coach, the Tigers finished last in the CAA and collected just three victories.

It wasn’t until 2011 that the foundation Ambrose had been putting in place came together for the program.

Anchored by a young but strong offensive line and the rushing attack of Terrance West, Towson won the CAA Championship with a 9-3 mark and made an appearance in the NCAA FCS playoffs.

Despite falling to No. 6 Lehigh 40-38 in the second round of the playoffs, the infrastructure of success had been put in place for Towson to succeed in its following seasons.

“I knew we would be better [in 2011],” Ambrose said. “I had no idea we were going to be that good. It was a focused group of guys that had been tired of losing and finally understood what it took to win.”

In 2012, the Tigers were denied a playoff berth by the selection committee despite winning their last four games of the regular season, three of which were on the road against Villanova, Delaware and New Hampshire.

The following season, however, the Tigers had a record setting year beating their first FBS opponent in school history, winning 13 games and appearing in the FCS National Championship Game.

Towson’s run to the National Championship game started at Johnny Unitas Stadium when the team rolled over Fordham 48-28.

The Tigers went on to earn two gritty road playoff wins against Eastern Illinois, in cold and snowy weather, and Eastern Washington, 2,486 miles away from home, to advance to the National Championship.

“[North Dakota State] are the standard,” Ambrose said. “But our guys weren’t really intimidated by much. If we had played 100 percent healthy and played on a dry track it might have been different, but we didn’t do enough to win.”

After its appearance in the National Championship, Towson suffered a tough 2014 season finishing the year 4-8.

Now Towson has its sights set on returning to the playoffs in 2016 with Oregon transfer quarterback Morgan Mahalak joining the team and an experienced group of veterans returning.

Although Ambrose has been at the helm of the program’s success, he credits former Towson University president Bob Caret for making athletics an important part of the university’s structure.

“[Caret] had learned that athletics can shed a lot of positive light to an institution if you commit to it,” Ambrose said. “This was his vision, this was his goal and he gave us the opportunity to get it done. Now he looks like a genius and Towson has a greater reputation because of it.”

After a successful six-year career at the University of Maryland, Eastern Shore, Don Metil arrived at Towson in 2013 to take over as head coach of the volleyball program. 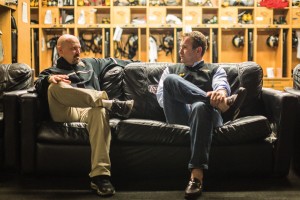 In just three seasons with the Tigers, Metil has already made a positive impact, taking the team to two Colonial Athletic Association (CAA) Tournaments and securing 63 wins.

“It kind of took a year to settle down,” Metil said. “There was a lot of transition in the program from old staff to new staff and different philosophies. There was also a mixture of athletes in the program.”

In Metil’s first year as head coach, Towson finished the season 10-24 and missed out on the CAA Tournament.

A year later, however, Metil had Towson back in the CAA Tournament as a No. 2 seed and finished the season with a 27-5 record.

Last year, the Tigers continued their success under Metil as regular season Co-Champions of the CAA and finishing the year 26-6.

Looking ahead to 2016, Towson will need some of its younger faces to take over the setting and outside hitting responsibilities, after graduating four key seniors.

“We have some young ladies who we hope can step up and do a decent job,” Metil said. “I think all of the other pieces for the ability to be successful are in place. Hopefully this young team continues to build on the successes that we have had.”

As Metil enters his fourth season at Towson, he hopes to continue to build success both on and off the court for years to come.

“I would like to have a championship or two under our belt,” Metil said. “But I also want Towson volleyball to get more developed in the community. I could see myself being here, like Lisa Costello or Mike Gottlieb, where this could be where I find happiness for the rest of my time here.”

Pat Skerry arrived at Towson in 2011 to take over as head coach of the men’s basketball program, a program that had suffered 15-consecutive losing seasons, and had won just four games the year before.

“Everyone told me, ‘you’re crazy,’” Skerry said. “But I had always liked programs where you have had to build something. That’s just how I am wired and I believed in Towson and what it was capable of.”

Since joining the Tigers, Skerry led the program to the largest single season turnaround in NCAA Division I history, 78 wins, two postseason victories and improved success in the classroom.

In his first season as head coach, the Tigers finished last in the Colonial Athletic Association (CAA) with a 1-31 mark.

Just one year later, however, Skerry led Towson to the largest single season turnaround in the history of college basketball, finishing the season with an 18-13 record.

Despite their regular season success in 2012, however, the Tigers were one of 10 teams banned from postseason play because of unsatisfactory scores in the Academic Progress report release.

“That group taught me what pride meant,” Skerry said. “Putting on the sneakers, going to work and playing for the name that is on the front of the jersey, when they had no postseason to play for.”

In 2013, Towson built on its success both on and off the court.

The Tigers finished their season 27-11, advanced to the CAA Tournament Championship Game and won two games in the CollegeInsider.com Tournament.

Towson also improved in the classroom. Five of its seniors graduated with degrees.

Losing five seniors took its toll on the Tigers in 2014, however. A young and inexperienced group finished the season 12-20.

In 2015, however, Towson’s young team came together, posted 20 victories and made an appearance in the Vegas 16 postseason tournament.

“[2014] was a disappointing year,” Skerry said. “We had some guys that weren’t quite ready to lead and we lost some close games, but I think that helped commence the turnaround that we have had this year and now the future is as bright as it has ever been for us.”