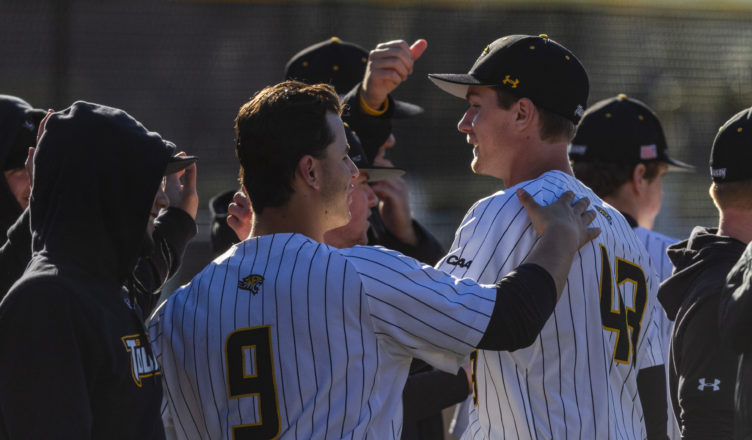 Towson faced the Lafayette Leopards for the first time since 2001 for a four-game weekend series.

The Tigers (6-8, 0-0 CAA) defeated the Leopards (4-10, 0-0 Patriot League) in their weekend series at Schuerholz Park. Towson won three out of the four games this weekend which included a doubleheader on Sunday.

“They continue to prove that they can do this,” interim head coach Miles Miller said.

“They continue to prove that we can make some noise this year.”

Senior southpaw Austin Weber started his first career game as a Tiger during the final game of the weekend series. The second game of Sunday’s doubleheader began with Weber retiring the side in order at the top of the first. He struck out eight batters and did not allow a walk in six complete innings.

“It was a lot of fun and it was a cool experience, but I’m mainly happy that we got the wins today,” Weber said.

In the third inning, sophomore outfielder Javon Fields was walked with the bases loaded to give Towson their first run of the game. The Tigers did not record a hit in the inning, but scored three runs off a bases loaded hit by pitch and a sacrifice fly.

An RBI by redshirt sophomore outfielder Matt Arceo in the fourth inning increased Towson’s lead to 4-0. Lafayette scored two runs in the seventh inning, but the Tigers responded with nine runs.

Two Leopards errors led to three runs, and sophomore catcher Trent Gast-Woodard hit a two-RBI base hit to left field. Fields batted twice in the inning, and after a sacrifice bunt picked up an RBI single. The Leopards added two runs in the ninth, but Towson was victorious 13-4.

“We finally started playing team baseball again,” Miller said. “We were able to create some chaos.”

The Tigers came back from a 5-1 deficit and defeated Lafayette 8-7 in game one of the doubleheader. The Leopards led 3-0 in the first inning, but Towson responded as freshman catcher Burke Camper picked up an RBI base hit. The Tigers were held to three hits in the next five innings and were shutout until the seventh.

Towson’s defense struggled early on, committing an error in each of the first four innings. Their four errors were a season high so far. Lafayette scored four runs off of errors and led 6-1 heading into the fifth.

“We were really a mess at the start of that first game,” Miller said. “For whatever reason, we didn’t make plays early,”

Although freshman southpaw Tyler Russo allowed six runs in the 3.2 innings he pitched, he also recorded a career-high five strikeouts.

“I felt bad for Tyler Russo because he actually made some good pitches, but we didn’t make any plays behind him,” Miller said.

Towson rallied in the seventh inning and scored four runs. Senior infielder Colin Conroy reached first base on a fielder’s choice which resulted in the Tigers second run of the game. Fields hit a two-RBI single towards right-center He advanced to third base on a wild pitch and scored when Camper singled towards second base.

“We felt that if we could just get our guys on base, eventually it might break in our favor and it finally did,” Miller said.

Towson took the lead in the eighth inning with a two-RBI single by Conroy. Senior infielder Brad Powers grounded out but picked up an RBI as the Tigers led by two. The Leopards picked up a run in the ninth but Towson held on to win.

“After losing yesterday, we knew that we played pretty bad and we knew that we were a much better team than that,” Weber said. “We had two chances to win today and we made the most of it.”

To begin game two, the Tigers loaded the bases but a fielder’s choice prevented them from scoring. Towson scored two runs in the second, but were shut out the remainder of the game. Lafayette scored a run in the fifth, and five combined runs the next two innings including a three-run shot down the left field line.

“We kind of let a lot of things distract us and we focused too much on things that didn’t relate to us,” Miller said. “It was probably our worst game of the season.”

The Tigers lost 6-2 and were outhit 10-5, struck out nine times and left eight men on base. In six of the next seven innings Towson failed to record a hit. Sophomore right hander Nick Ramanjulu started on the mound and went six complete innings, he recorded seven strikeouts and allowed five hits.

In game one, junior right hander Josh Seils pitched three scoreless innings to open the game. He went 4.2 innings and allowed seven hits and one run, the Tigers only allowed four hits the remainder of the game.

“It’s showing that our pitching is getting a lot better,” Weber said. “We’re passing the ball to the next guy and they’re getting those outs for us.”

Lafayette tied the game in the ninth. A base hit from sophomore infielder Noah Brown put the winning run on base. After a hit by pitch, Tereo hit a walkoff single with two outs to win the game 6-5.

“To come out to and win two games and come from behind in game one, we’re just steadily getting better,” Miller said.

Towson heads to Washington D.C. on Tuesday, March 10 at 3 p.m. to face the George Washington Colonials.