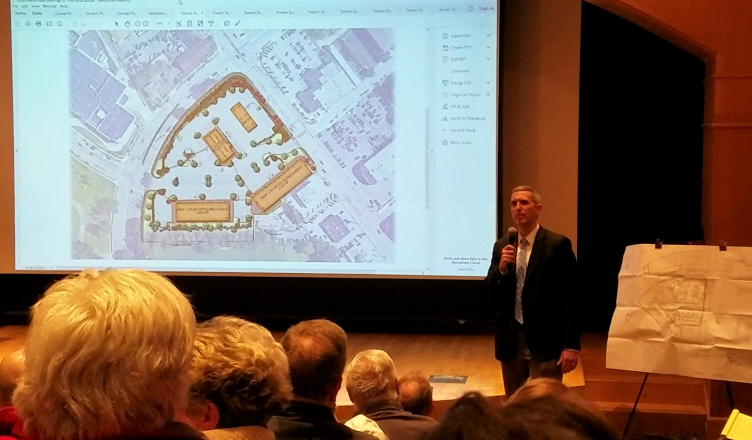 Towson area residents filled the seats – and the aisles – of the Sheppard Pratt Conference Center on May 8 during a community input meeting to discuss the development of a Royal Farms that has been proposed for the corner of York Road and Bosley Avenue.

The proposed development would be located at the former Towson Fire Station and would include a convenience store, a gas station with 12 pumps and two retail and restaurant buildings.

Community members in attendance raised questions and concerns about the project to representatives from the Baltimore County government and the property’s developers, Caves Valley Partners.

The Baltimore County Council passed a resolution approving a Planned Unit Development (PUD) last December, allowing the developers to build a gas station on the property.

Prior to the approval of the PUD, zoning prohibited the construction of gas pumps at the site.

The council approved the PUD in exchange for $50,000 to be used for “community benefits” including improvements to the West Towson Trail, tree planting throughout the West Towson community and two solar-powered speed display signs in the area. However, many residents said that the development itself fails to benefit the community.

Some community members said there is no need for an additional gas station and convenience store because there are currently two other gas stations within a block of the project site and six others within two miles of those stations.

Attendees at the meeting also expressed their fears that the development would negatively impact the environment.

In April, 30 trees on the property were cut down to make room for the new development. Residents complained that the trees that are included in the plan do not provide sufficient shade coverage and are not large enough to fight air pollution from the gas station.

The development’s southern border would face the neighboring Immaculate Conception School. While the current plans depict trees along that border, West Towson resident Karen Camp said those trees do not provide a sufficient buffer.

“Every day when my children play on that playground, on the weekends when they have their sporting activities, my children will be breathing that air,” Camp said. “I cannot believe that you would go to bed at night and believe that’s a benefit to the community.”

Vivian Kreller, an Idlewylde resident, is concerned with how the development might increase traffic congestion in the area.

“I feel that it’s already a very densely populated area with a lot of businesses and a lot of gas stations and convenience stores, and there are a lot of communities that would be adversely affected by the amount of traffic that it would create in the area,” she said.

Residents are particularly concerned about traffic congestion that may result from vehicles turning left across Bosley, or crossing Bosley head on from Kenilworth Drive, to enter the development.

According to Caves Valley’s attorney Christopher Mudd, there are currently no plans to build a traffic light at the development’s proposed entrance.

Katrina Kamantauskas-Holder, a West Towson resident, said the development has no value to the local community and could impede pedestrian travel.

“I’m most concerned about the fact that it is designed for automobiles, that it is designed to pull traffic in from the beltway,” she said. “It has wide driveways that pedestrians are going to have trouble crossing. It doesn’t provide any local benefit.”

Mudd said the developers are listening to the community’s input and have been receptive to some of the concerns that residents have raised in the past, such as furnishing the retaining wall with shrubbery and other landscaping.

“Developers take a lot of risk and one of them is to start this process and to evaluate what to address, what not to address and how to push forward with the project going on, and to gauge the amount of community opposition and input that is going on,” Mudd said. “So there will be an opportunity for us to go back and say ‘Can we address these things? Should we address these things?’”

Towson resident Mike Ertel is not opposed to the retail portion of the development, but said Towson doesn’t need another gas station because it will cause light pollution.

Ertel, a Towson University alumnus, hopes that students will care about the neighborhood where they live and go to school.

“I think it’s hard for students just to outwardly say ‘well, I don’t want a gas station there up the street from campus,’” Ertel said. “In fact, I think a lot of students would probably say ‘hell, I can get chicken there’ or something. It might sound more like a benefit, but what it does is it’s slowly eroding the quality of life of the neighborhoods that we’re seeing.”