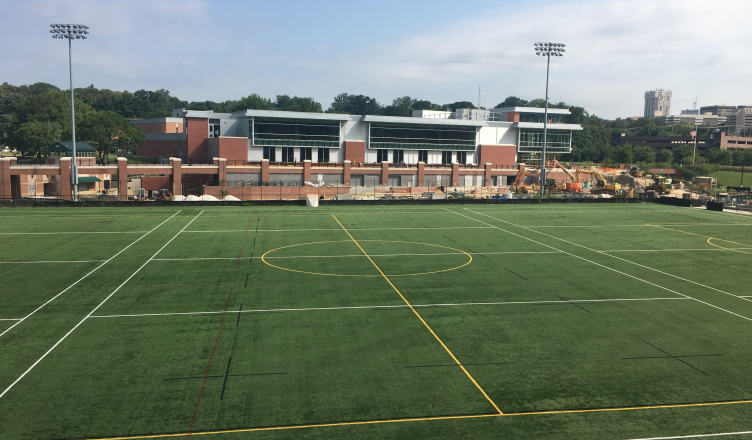 The long-awaited Burdick Hall renovations are slated to be completed by Dec. 2017, according to Director of Construction Services Scott Guckert.

Construction on the 94,000 square foot addition began in Aug. 2015. Guckert said that the combined cost of the renovations of Burdick Hall and the bridge over Osler Drive comes in at $42 million.

Students will also be able to return to Towson’s 33-foot climbing wall when the project is complete.

Emma Kehrman, a sophomore and fine arts major at Towson, said the tight space caused by the closure of parts of Burdick Hall kept her from going to the gym.

“There wasn’t anything that I felt I would continually do or really enjoy doing,” Kehrman said.

However, with renovations nearing completion, Kehrman said she is most excited to see the climbing wall open again and believes she will be more inclined to go to the gym.

“I’ve always loved climbing, and I might actually use it,” she said.

Director of Campus Recreation Grady Sheffield said he believes the functional training course will be most popular.

“Once [renovations on Burdick Hall are] completed, we will be the only campus recreation facility in the country that is offering a Ninja Warrior style training course. Combined with the sprint hill, simulated stadium stairs, turf floor and all the equipment that will be offered in these areas, the TU community will have a fitness training space equivalent to what you would expect at professional training facilities.”

Director of Communications and Media Relations Ray Feldmann expects this project to benefit students the most.

Feldmann also believes that the expansion will excite prospective students and be a determining factor for many who decide to attend the University in the future.

Sheffield sees Burdick’s expansion as a chance to add opportunities for employment at TU.

“Campus Recreation anticipates hiring an additional 100-plus new student employees to over 150 student employees we currently have on staff, putting hundreds of thousands of dollars back into the hands of TU students,” he said

In addition to the Burdick Hall and Osler Drive Bridge projects, several other parts of Towson’s infrastructure are also undergoing construction.

The Glen Bridge went under contract in May 2017, and is expected to be open by the beginning of the semester. The old bridge, which had “met its life expectancy,” will be replaced by a new, larger bridge, according to Guckert.

“It had lasted as long as it was supposed to and we’re replacing it,” he said. “Now, the difference is that we are providing a slightly larger bridge which will be a comfort issue for people walking back and forth and aren’t bumping shoulders.”

Guckert said the new bridge is expected to last at least 30 years.

Construction on the Residence Tower began in Oct. 2016. At the moment, however, there is no scheduled end date for construction happening. The $32.5 million project involved a complete gut of the building, according to Guckert.

“We took out all of the interior and put all new walls up,” he said. “It’ll just be a modernized version of housing to be brought up to the standards of the other residence facilities on campus.”

The building is expected to get new paneling on the outside as well, so it will no longer be concrete walls. With a completely new interior, Guckert believes the Residence Tower will benefit students by providing them with a modernized residential facility.

The Auburn House and it’s pavilion, which is now called the South Campus Pavilion, began renovations earlier this year, and are expected to be completed this fall. Both buildings are receiving new air conditioning and heating units, and the pavilion will be getting new bathrooms in the facility attached to it. The Auburn House will have new wood flooring, according to Guckert.

Assistant to the President for Events and Engagement Teresa Hardin said the Auburn House will primarily be used by Towson University President Kim Schatzel for hosting small events for donors, alumni and other people to help showcase the progress TU is making. The pavilion, on the other hand, can be used by students and faculty on campus, so long as they reserve the space ahead of time.

Construction crews are also installing new voltage cables under Cross Campus Drive and widening Towsontown Boulevard. Neither of these projects are being completed by Towson University.