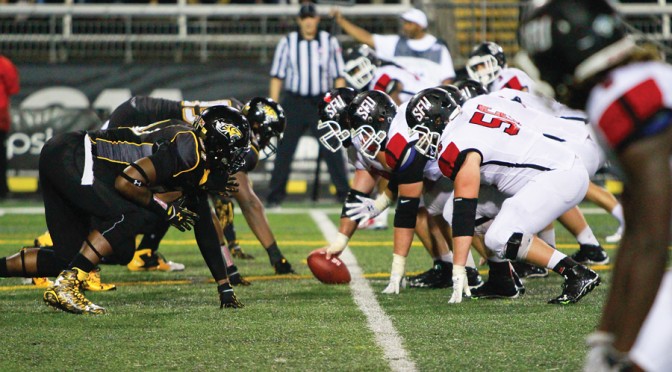 The Tigers executed a strong first drive with a good blend of run and pass plays, leading to a 33-yard field goal from sophomore kicker Aidan O’Neill to take an early 3-0 advantage.

Delaware was forced to punt on its first drive, but pinned Towson on its own goal line. The visitors forced a three-and-out and got the ball back in TU territory, looking to capitalize on the good field position.

Delaware went to work quickly as redshirt junior quarterback J.P. Caruso connected with redshirt senior wide receiver Diante Cherry for a 17-yard gain to put his team in scoring position. Caruso capped off the drive with a three-yard touchdown strike to redshirt junior tight end Charles Scarff to put the Blue Hens up 7-3.

On the Tigers next drive, Stover threw an interception. He put the ball on target for the receiver, but the ball was bobbled into the air and snatched by junior defensive back K.C. Hinton near midfield. Towson’s receivers had several drops throughout the day.

Stover threw another interception just before the half, as he overshot a receiver on a downfield pass. Junior defensive back Nasir Adderley made an impressive one-handed grab to force the turnover, but the visitors couldn’t convert and took a 7-3 lead into the break.

Kane compiled 32 yards on Delaware’s first drive in the second half to put the team in scoring position. Williams finished the drive with a 30-yard touchdown run on a handoff to the outside.

Towson responded on offense just before the final quarter as Stover marched the team downfield on a methodical five-minute drive. Redshirt sophomore running back Shane Simpson led the team into Delaware territory through a strong rushing effort, and Stover capped off the drive with a 39-yard touchdown pass to senior wide receiver John Tsimis.

Following a successful two-point conversion, Towson narrowed the score to 14-11. The team made a strong stand on its next defensive possession, but a muffed punt gave the ball right back to Delaware. However, Delaware couldn’t get in the end zone and had to settle for a field goal to extend its lead by six.

“We talked about this on the sidelines,” Ambrose said. “If we force a field goal, we knew we were going to win.”

Stover led the team downfield with a mix of short passes and scrambles outside of the pocket. He completed the late comeback with a 14-yard touchdown throw to redshirt junior wide receiver Sam Gallahan with 35 seconds remaining on the clock.

“As quarterbacks, we talk about it being a new play every play,” Stover said. “We had 30 seconds to score a touchdown and we did that. I gave Sam a chance and he made a great play.”

Towson carries its momentum from this emotional win into a road matchup against Elon Saturday, Nov. 4, at Rhodes Stadium. Kickoff is set for 2 p.m.

“For the young ones who haven’t experienced what it’s like to beat a ranked team, to beat a team that you’re not supposed to beat, [this win] takes a sledgehammer to the glass ceilings in their minds,” Ambrose said. “Once you crush the ceiling, anything is possible.” 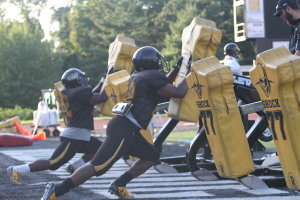 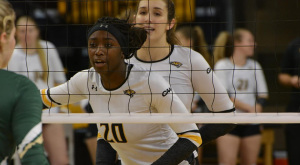