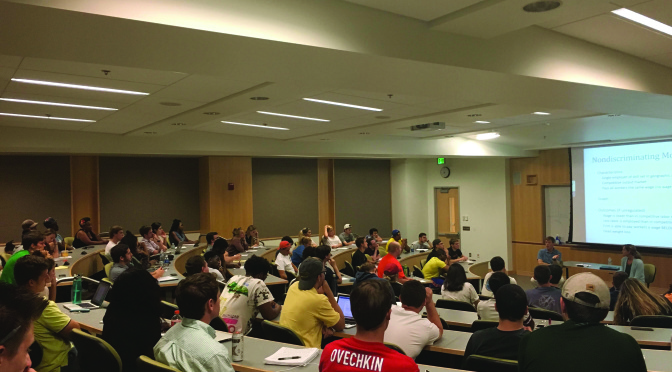 Economics professors Melissa Groves and Howard Baetjer battled over whether the minimum wage should be raised or repealed Sept. 14, during a faculty debate in the Liberal Arts Building.

Baetjer was in favor of repealing the minimum wage all together. He said that if a company wanted to hire low-skilled labor for less than the minimum wage, they should be allowed to do so.

Baetjer said that companies should be able to hire their employees for however much their skill is worth. He said that because they are rejected this right, companies are losing money.

In contrast, Groves was in favor of raising the minimum wage and said that the current minimum wage is not enough for someone to support themselves, let alone families.

“The purchasing power of minimum wage has fallen,” Groves said.

Groves said that 67 percent of workers that earned the minimum wage in 2015 were working in service occupations such as food preparation and serving. States with the highest number of workers paid the federal minimum wage or below include Virginia, Alabama, Louisiana and Mississippi.

Each professor had time to rebuke the other before an open Q&A session with attending students.

Groves countered Baetjer and said that internships provide different opportunities than working at a job that pays minimum wage.

“I’m concerned about people who are poor, but I’m really concerned about those who are going to be permanently poor because they can’t get into the labor market on the minimum wage,” Baetjer said.

The debate was sponsored by the Towson Economics Society and the Political Economic Project.

“The Political Economy Project’s goal is to support and enrich Towson students who are interested in political economics, social philosophy, foreign policy and any related fields,” said Imani Anderson, president of the Economics Society. “It’s for anyone who is seriously interested in the fundamental questions of how society can best be organized to advance the well-being of mankind.” 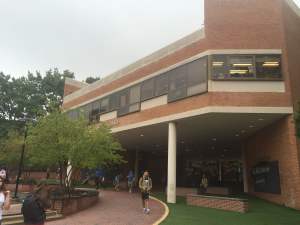