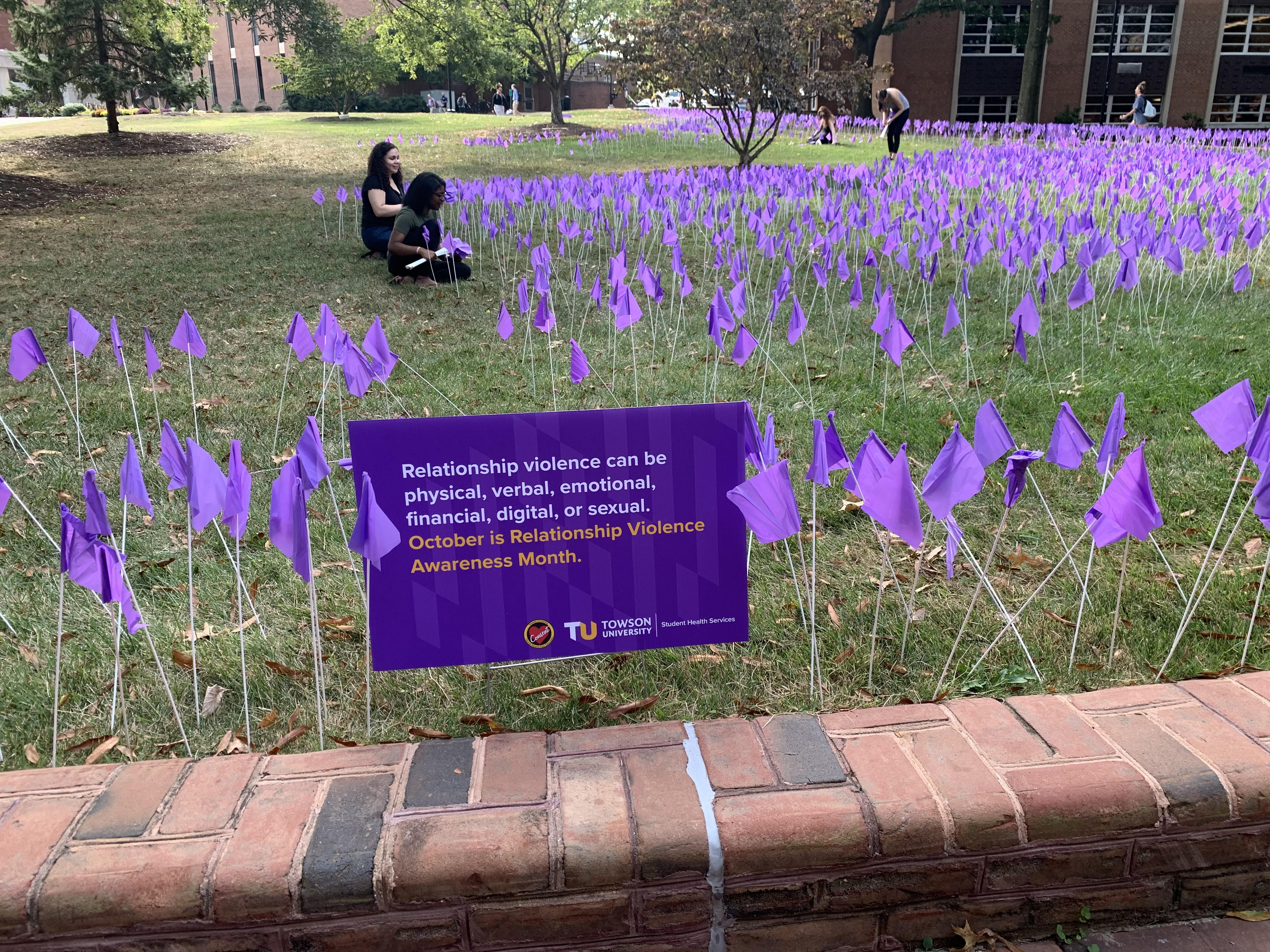 Towson’s Sexual Assault Peer Educators ran the campaign and placed the flags to represent the number of Towson students that could be impacted by relationship violence, according to Allison Seeley, the Coordinator of Health Education and Promotion with Student Health Services.

Seeley shared the significance of the number of flags saying each one “represents each one of the Towson University students that may be or will likely be impacted by relationship violence at some point in their lifetime,” according to national statistics of sexual violence applied to Towson’s campus body.

Seeley said that the Sexual Assault and Sexual Health Awareness Peer Education programs have been working to raise awareness on relationship violence and other forms of sexual violence throughout October as well.

“We [Sexual Assault and Sexual Health Awareness Peer Educators] will also be tabling throughout the first two weeks of October to discuss strategies for remaining in healthy relationships, for recognizing unhealthy relationships and how to support friends, strangers or family members,” Seeley said.

“The whole flag display really hits home for a lot of people,” Robbins said. “As someone who helps schedule a lot of workshops and stuff for the sexual assault peer eds, we know that healthy relationships is one of the top presentations we talk about, which is focused on healthy relationships, how to know if something is unhealthy.”

She added that the feedback on campus is positive as more people reach out for more healthy relationship presentations.

“So with this campaign, we see it all over,” Robbins said. “I’ve heard people just reading the signs outlining the perimeter and they were just talking about how many students that are impacted by this or potentially could be. Just hearing the chatter about that is kind of rewarding because at least students are hearing and seeing what’s going on and I think that’s really nice. At least we know students are walking away knowing what’s happening on our campus.”

TU junior Keighly Little, a Sexual Health Awareness Peer Educator, added that this campaign allows for more awareness on domestic violence, a cause that she feels needs more attention.

“I think that’s important because we need to acknowledge domestic violence because not enough people do,” Little said. “I feel like we need to be able to recognize the signs in somebody else and also recognize the signs in ourselves because that’s important. I feel like this can be very impactful especially because they know what the flags stand for.”

To Robbins, the campaign encourages the campus to look out for others as well.

“People can really see this is something we need to talk about and look out for our fellow tigers on campus,” Robbins said.

According to Seeley, the awareness gives the campus the opportunity to start impactful conversations that need to be had.

“We’ve definitely heard from other faculty, students and staff that this is an impactful campaign,” Seeley said. “Just seeing the number of folks impacted by relationship violence, represented by these flags, can be a really powerful moment. It’s a good conversation starter and people are generally receptive to learning more about being in healthy relationships.”

“I love it, honestly,” he said. “SHAG [Sexual Health Awareness Group] and SAPE [Sexual Assault Peer Education] bring so much awareness to this campus about stuff like this to make sure everyone is safe and to help their friends and stuff like that.