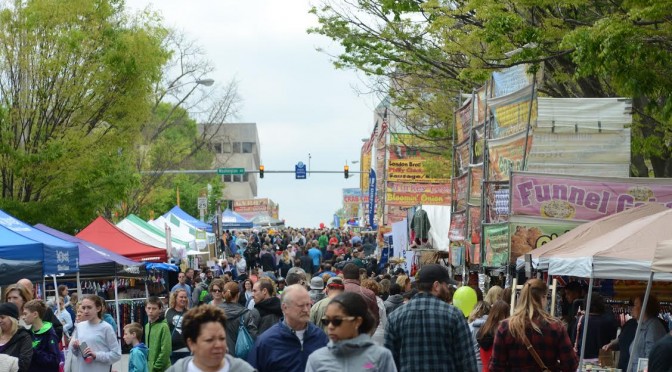 Four hundred vendors and artists lined Washington, Pennsylvania and Baltimore avenues in Uptown Towson this weekend, April 30 and May 1, for the 49th annual Towsontown Spring Festival.

Organized by the Towson Chamber of Commerce, the festival included games, carnival rides and performances from 15 bands like Amish Outlaws, Reagan Years, and 1974.

“We really do coordination of sponsorships and vendors,” Towson Chamber of Commerce executive assistant Liz Bailey said. “The festival features a lot of different vendors, food and crafts. It really takes an army to put this together.”

Since its inception in 1967 as an art exhibit where local artists and bands could come to perform, the Towsontown Spring Festival has grown into an event that attracts thousands of people annually.

“It’s a great way to bring in people that may not usually come to the area,” Bailey said. “It’s a way to show off the town to them and possibly bring them back for other things.”

At the 36 Letters stand along Washington Avenue, artist Nathaniel Badder sold art pieces that featured various words spelled out from pictures of letters out of various objects and signs.

“I heard great things about this festival,” Badder said. “It’s a fun event for families. And it’s that time of the year where the artists start waking up to introduce their stuff to the world.”

While the first day of the festival was crowded and alive under the hot spring sun, Sunday’s rainy weather may have discouraged people from attending.

“Unlike other years, the weather is not in our favor,” first-time vendor Amie McCaslin said. “It’s hard to think about spring when it’s freezing outside, but it’s fun and it’s great to be here and get to talk to people.”

Despite the weather, the show must go on. People didn’t let the weather stop the festival’s fun and by the middle of the day, the clouds and threat of more rain didn’t seem to faze anyone.

“I came here because it looked like something fun to do,” junior Madison Ferraro said. “There are not usually events in the area to go to and everything uptown you have to be 21 to do, so it’s something to do around here.”

Next year will mark the festival’s 50th iteration, so the Chamber of Commerce is preparing for even more fun to bring to the ever-growing Spring Festival.

“We’re excited for next year,” Bailey said. “It’s going to be bigger and better than ever.” 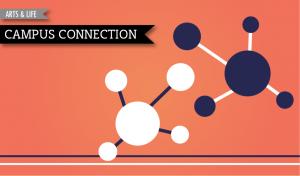