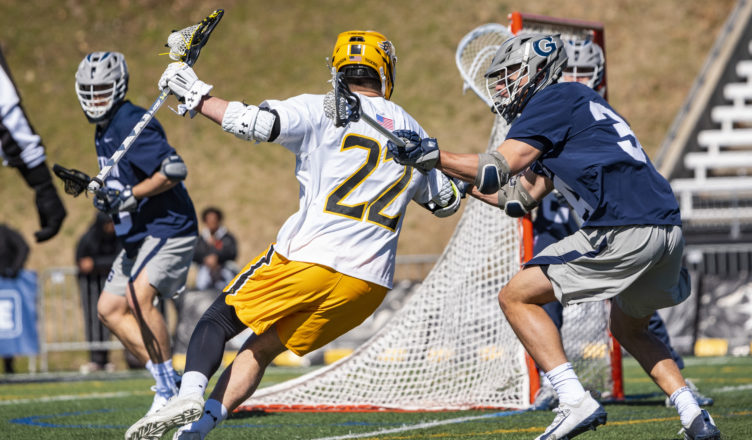 On March 12, the NCAA announced that all spring sports would be canceled, as well as any remaining winter sports competing in postseason tournaments such as basketball, ice hockey, and indoor track.

Colin Conroy is a senior infielder for the Towson baseball team and his reaction was shared by many in the sports world.

“Kinda in shock, mostly that’s not gonna happen,” he said. “I think when the NBA suspended their season, our teammates texted each other there’s no way. Then, the next morning in the locker room, we find out from a tweet that said the season was suspended. We were sitting there and really quite didn’t know what to say.”

For the senior student-athletes, this initially meant a sudden end to their collegiate careers. Since most collegiate athletes do not pursue professional careers, it would have been the final time they competed in their respective sport.

Brody McLean is a senior attacker for the men’s lacrosse team and, despite the uncertainty, realized the importance of the decision.

“I was upset,” he said. “Being a senior I didn’t know what that left for me. But you want to do what’s best for everyone else. We have to do our part. It’s the best thing, but I was upset I wasn’t going to be able to finish out the season.”

“I think for the spring sports athletes, it’s a good idea,” Big East commissioner Val Ackerman said to ESPN. I like the idea of some kind of a make-good there and that’s the way to do it,”

Towson currently sponsors eight spring sports, but men’s lacrosse is taking the biggest hit from this. They had 12 seniors listed on the 2020 roster, by far the most of any TU spring team.

The men’s lacrosse team struggled during the abbreviated season. For the first time in program history, Towson was 0-6 at the time of cancellation. The Tigers lost four straight games by five or more goals. This made it even harder for McLean to acknowledge the season was over.

“Definitely didn’t help,”  McLean said. “Every week it felt like we were taking steps in the right direction. Not being able to take a big leap and get a win definitely sucked.”

Unlike the men’s lacrosse team, the baseball team was playing well in the weeks leading up to the cancellation. The Tigers were 7-8, but had won five of their last six games and were competitive on the road against a top-10 opponent in Miami. Conroy was disappointed that the team wouldn’t get to continue playing considering the streak they were on.

“We had been playing really good baseball the last two weeks,” he said. “I felt we had momentum going into our last game, when we beat George Washington. I think we were just mad. I was sad, I felt like we had something going. I’m upset we can’t finish that.”

For Conroy, he received a medical redshirt, which means he has another year of eligibility remaining. Even if he didn’t have this option, he would have still returned to play for the Tigers.

“I’m excited to continue what we’ve been doing,” he said. “It gives people a chip on their shoulder, you never know when baseball’s gonna end.”

McLean, on the other hand, is unsure of his future but said he would consider returning if he is able to.

“I’d love to come back if it’s an option,” he said. “I’ll talk with my parents and coaches and see what the best option is.”

The future for the senior student athletes is unclear, but both Conroy and McLean appreciate what Towson has provided them.

“It’s meant a lot, especially transferring,” McLean said. “Finding a school I felt comfortable with the coaches and the atmosphere around the program was really important to me.”

Conroy hails from California, and the Irvine Valley College transfer appreciates the opportunity the Tigers provided him.

“Towson was one of the only schools that gave the opportunity to play D1 baseball,” Conroy said. “It’s been fun, quite an experience to come to the east coast. I’ll hold Towson close to my heart.”