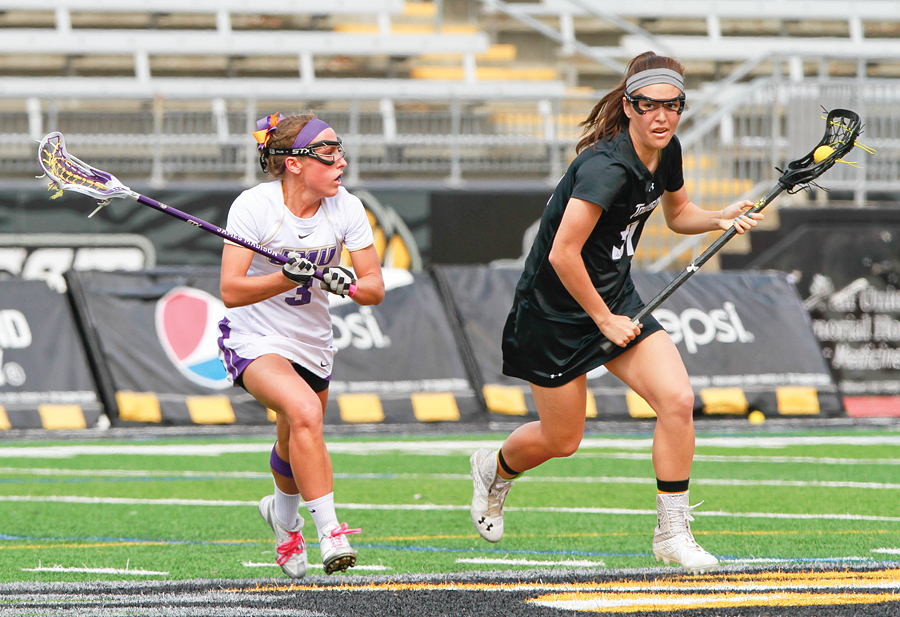 Freshman attacker Erika Cavallo had played just five games in her career leading up to Saturday’s matchup with the Cal Bears. She had seven goals in those games, including three goals against No. 2 North Carolina and two other multi-goal games.

It was a good start, but she added to the list of accolades in Towson’s 16-3 win over Cal. Cavallo finished with five goals, a career-high, and added an assist.

“I definitely feel like I’m improving and I think most of its from my teammates,” Cavallo said. “Coming into Towson, all the girls, even the upperclassmen are so welcoming. They want you to do well and they push you to do well. I feel that I get better with every game. … Coming in, you know that Towson’s a great lacrosse program already, and you’re like … ‘Let’s see how much I can give to the team.’”

The Tigers’ freshmen class continued the momentum through the next 10 minutes. Attacker Erika Cavallo beat Bears’ goalie Kate Gutierrez with a little over 19 minutes left in the half and midfielder Emily Gillingham made it 4-0 almost two minutes later on an unassisted goal.

“We’ve got a strong presence in the stats from our sophomores and freshmen, which is very exciting,” Head Coach Sonia LaMonica said. “Every piece is important. It’s important that the offense is running through these actions and our freshmen and some of our sophomore are on the scoring end of those actions.”

The four-goal streak to start the game ended with 16:19 left in the first half, when midfielder Gaby Christman beat Towson goalie Kelsea Donnelly to make it 4-1. However, Cal couldn’t cut further into the lead.

Towson added to its lead with 5:49 left in the half, when sophomore midfielder Samantha Brookhart scored off an assist from Cavallo.
Brookhart finished the game with three goals and three assists.

“I think we’re coming off a little high probably from [an overtime loss to North Carolina],” Brookhart said. “Today was nice to come out and get everyone touching the ball and just moving well.”

The Golden Bears answered to make it 5-2 after midfielder Michaela Bird scored off an assist from Christman. However, the Tigers moved the lead back to four goals with a goal from Cavallo off a pass from senior attacker Taylor Moore.

Cavallo opened the second half with two more goals, moving the score to 8-2 with 25 minutes remaining. The first came off an assist from junior midfielder Breanna Hamm and the second came off a free position attempt with 25:08 left.

The scoring continued for Towson through the first 10 minutes of the half. Brookhart tallied her second goal less than two minutes after Cavallo made it 8-2. Three minutes later, she sent a pass to sophomore midfielder Michelle Gildea, who scored to make it 10-2 with 20:56 left.

“We’re learning a lot about ourselves,” LaMonica said. “Discipline offensively was a big, big factor that we had to get better at. … It’s been a part of us figuring out who we are and the roles that we’re putting different people in and then getting comfortable in those roles. It’s all a work in progress.”

After a goal from Hamm, Cal cut the lead to 11-3 on another Christman goal.

Towson responded with five consecutive goals, including two from freshman Gabby Cha, to run away with the victory.

The Tigers will be back in action Wednesday when they face UC Davis at Johnny Unitas Stadium. The game is set to start at 7 p.m.