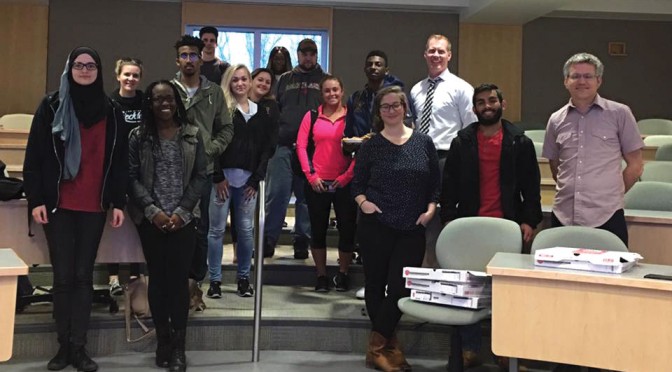 Maryland Public Interest Research Group Director Emily Scarr advised students and faculty on methods of gaining social momentum and interest Tuesday, March 22, as part of a lecture entitled, “Visibility: Getting The Word Out.”

Scarr, who has been with non-profit MaryPIRG for three years, began her lecture by asking her audience to think of the various clubs and organizations that stand out to them on campus.

This led into the main point of visibility being imperative to obtaining followers and projecting a message. Visibility lets people know that your group exists, and it helps generate funding and a reputation, Scarr said.

Using Social Justice Awareness Day on Saturday, April 9 as an example of how to efficiently gather a large audience, Scarr used a screen to show the importance of creating an outline to find out who would be most likely to attend, what the message would be and if a hashtag could help.

Scarr said that using a variety of mediums is important because there are some forms that may appeal to one person but not to another.

She advised using a mixture of passive and active visibility.

Handing out flyers, sidewalk chalking, tabling, texting people and making flyers are all forms of active visibility, while asking a professor to email students is passive.

Using props and costumes is also a great way to gain attention, she said.

Social media is another useful tool, especially creating Facebook groups and tagging other TU handles on Twitter, such as other groups and departments.

Creating clothing, swag, posters or stickers are all unique ways to set oneself apart, according to Scarr.

“Put your name on everything,” Scarr said.

To advertise for this event, the organizer used flyers, free water bottles and pizza.

Some professors also offered extra credit to students who attended.

The event was hosted by the Office of Civic Engagement and Leadership and organized by service learning intern Usjid Hameed, who works under sociology professor Jeff Larson.

“We came up with this idea on what we can do to have a lasting impact, to make this series institutionalized for activism and speaking up in your community,” Hameed said.

He also said that he thought the 25-person turnout to the event was good, and that he wanted audience members to value and learn from the experience.

“It’s a way to give them the tools that people need to create change at Towson,” Hameed said.

Larson added that since he has learned more about gaining visibility, he plans on doubling the audience at his next event.

“Maybe we can inspire somebody, and give them new skills and efficacy,” he said.