Lenno, who previously served as the University’s director of fraternity and sorority life, has served as interim AVP for Campus Life since January.

“I’m looking forward to working with our students and providing them an outside the class experience that is great,” Lenno said.

The search committee selected Lenno from a pool of about 90 original applicants, according to Vice President of Student Affairs Deb Moriarty.

Moriarty said that Lenno is a “perfect fit” for the University right now.

“I think it’s a lot harder to get a job when you’re already in as an interim, because people scrutinize you in a little bit of a different way than an external candidate,” Moriarty said.

Lenno’s role as AVP of campus life will provide leadership and management to Student Activities, New Student Programs, the Office of Fraternity and Sorority Life and Campus Recreation.

Since Lenno has been in the interim position for seven months, he said that he has already been able to develop good relationships with the staff and begin to develop a vision for the office.

As the former director of fraternity and sorority life, Lenno helped to build standard operating procedure and a mission for the department. According to Lenno, his new position will be similar, but on a larger-scale.

Lenno said that his office will put a large emphasis on helping students obtain leadership skills, and on being advocates for students in all aspects of their campus life.

“I want everyone to know that this is an office that our students can come to, whenever they need help with whatever it may be,” Lenno said. “I think it’s extremely important that our students understand that.”

Moriarty emphasized Lenno’s strengths in getting away from “silos,” so that the directors within the Campus Life cluster can work together, rather than solely as individual departments.

While the campus was sad to see former AVP for Campus Life Teri Hall leave, according to Moriarty, the search committee is confident in Lenno’s abilities to lead.

To Lenno, the new job will bring some new challenges, but he is excited to navigate the new school year.

“It’s always hard to predict what the challenges are going to be, especially with what we’re doing, but I’m kind of excited about…taking on whatever challenge it is,” Lenno said. 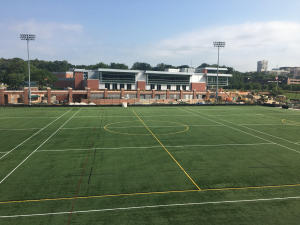