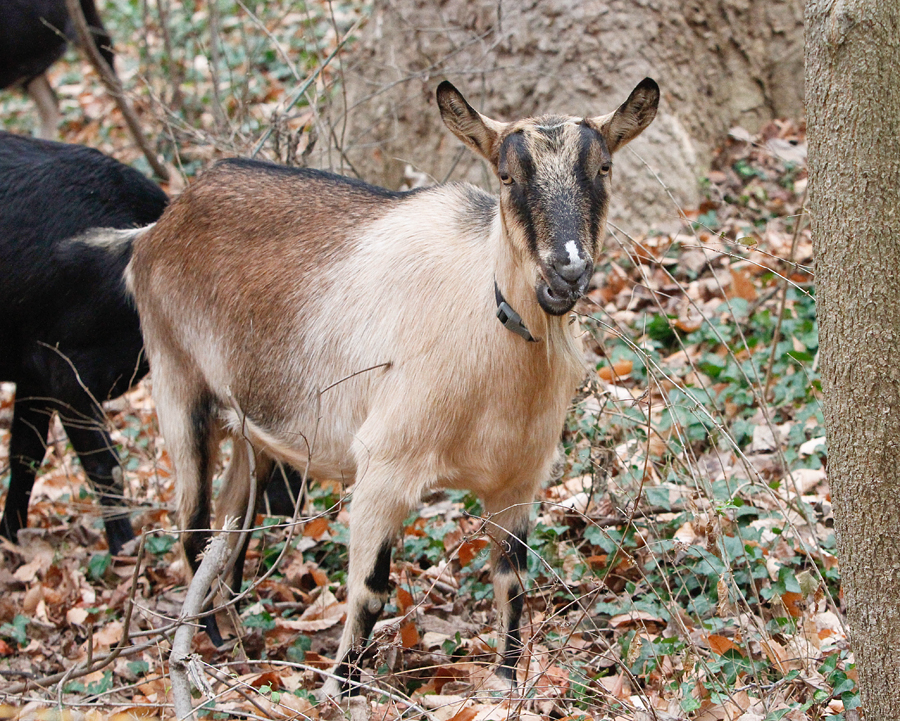 A gaggle of 18 goats gallivanted through the Glen Arboretum for a few days over the break, in a trial to see if the animals could be used to effectively help with a problem that the forest has been facing.

“The major issue that we’re dealing with is invasive species,” James Hull, a retired professor and director of the Glen Arboretum, said. “And the most difficult species to deal with is English ivy.”

The main goal of the Arboretum is to establish an area that holds all of the 120 trees native to Maryland on campus. At last count, according to Hull, the Glen currently holds 94 of those trees.

English ivy is an invasive plant species that is difficult to control and detrimental to the forest. The ivy can overwhelm the trees, killing them.

Goats were not the first option considered for the task of removing the ivy, however. Students have also been coming to the Glen to try to remove the English ivy.

“This fall we’ve had over 150 volunteers, and they’ve been very good,” Hull said. “But the problems we run into in the late summer and early fall are the ground bees.”

Hull said that the bees become more aggressive later in the season, and that he did not want to put any students in danger of being stung.

Using machinery to clear out the invasive species would have been “highly destructive” according to Hull, and using chemicals would have killed species other than the ivy – and may not have been that effective, considering the waxy exterior that the ivy has, making it difficult for the chemical to do its job.

“And the third option was goats,” Hull said.

The goats were trucked in every morning, and trucked back to their farm in Harford County each afternoon that they were on campus.

To measure how effective the technique is, and to keep the goats from wandering off or eating desirable plants, they were enclosed in a quarter-acre pen.

“We’ve been clearing invasives for about three years,” Veronica Cassilly, who owns the goats, said. “We just string up a temporary electric fence.”

Cassilly said she first got goats to deal with invasive species on her own farm.

“Maryland’s forests are in terrible shape, we have a lot of invasives,” she said.

Hull said that in the spring, he’ll be able to compare the area where the goats were placed to the rest of the forest, to see how effective the treatment is.

In addition to the work that he does for the Glen, Hull created a board of directors that oversees the arboretum and gets students involved as often as possible.

“I generally like to have students plant trees, that’s my first preference. My reason for that is if you plant a tree, you have a certain amount of ownership,” Hull said. “And so I tell these students, ‘You put this tree here, this tree has a life expectancy of 200 years, you can bring your grandchildren here and tell them you planted it.’”

Hull said that he created the board of directors so that there would be more than just one person with a stake in the arboretum so that it will be able to be perpetuated.

“I felt that if the arboretum is to be sustained, it needs to have more than one person who’s pushing for it,” he said.

The goats help the mission of sustaining the arboretum by helping to clear out the threatening invasive species. And, while they’re no longer in the forest, the goats made a mark on campus, in more ways than one.

One thought on “Goats graze in the Glen Arboretum”