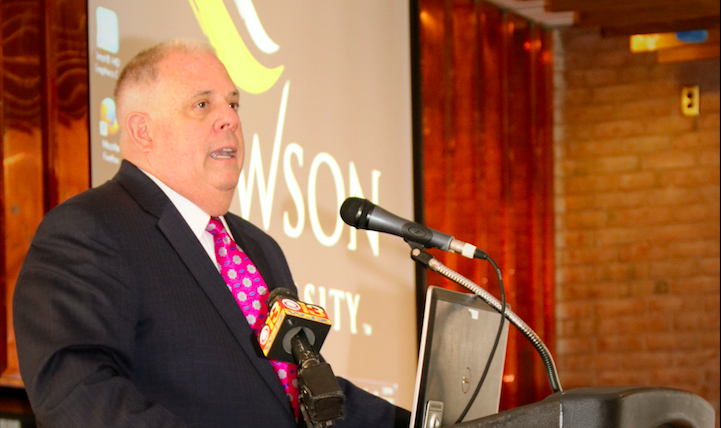 Maryland Governor Larry Hogan discussed how he went from being an underdog who had never been a politician to becoming a Republican governor in what Hogan described to professor Richard Vatz’s advanced persuasion class on Oct. 19 as “the bluest state in the nation, that had only elected one other Republican in 50 years.”

Vatz has Maryland’s governor speak to his persuasion class every year as what he called a “great Towson tradition.”

“Political persuasion, of course, is composed of the agenda and spin,” Vatz said. “In the 2014 race for governor, Larry Hogan’s opponent used classic negative campaigning. Complete with tasteless, untrue attacks claiming Mr. Hogan opposed abortion in cases of incest and rape, and more interesting – claiming repeatedly in ads that Mr. Hogan was a ‘dangerous man,’ and radically anti-woman.”

Vatz explained that Hogan “successfully destroyed that spin” when his daughter, Jamie Sterling, spoke against such characterizations in an ad. In that ad, Sterling says Hogan took pride in raising his daughters to be strong, independent women.

“Look at his ad on YouTube, students, and you will learn from it,” Vatz said. “Just great persuasion.”

Hogan told the students that he thinks they are all lucky to be studying at Towson.

“This class has been beneficial to a lot of people for many years,” Hogan said. “I have a tremendous amount of respect for your professor, who does a wonderful job, and he knows an awful lot about politics, and persuasion and communications.”

Hogan told the audience that before he became governor, he was a lifelong small businessman who had never held elected office before. He said he decided to become governor because he was frustrated with the way that Maryland was headed and thought someone needed to step up and try to do something about it.

Hogan described his launch of the group called “Change Maryland.” He said this group became the largest, non-partisan grassroots organization in state history.

“I happen to be a registered Republican,” Hogan said. “But I was never a very partisan person, and we reached out to people regardless of their party affiliation, and had just as many Democrats as Republicans involved in our movement…. We focused on the issues most people in Maryland were concerned about. We were focused about the economy, about jobs, about the tax burden in Maryland.”

Hogan said that they have made some progress in the forms of job growth and increased employment.

Maryland has gained 130,000 jobs since Hogan took office in January 2015 and the state’s unemployment rate has dropped to 3.8 percent.

Hogan said Maryland will also have record investments in education for three years in a row, and has invested $3 billion in protecting the Chesapeake Bay.

“We’ve made some progress, but we’re just getting started,” he said.

Hogan said most of his campaign was “grassroots, door-to-door, hand-to-hand.”

“I went to every single jurisdiction in the state, multiple times and shook every hand I could, answered every question at every place I could go, and we surprised a heck of a lot of people,” Hogan said. “No one expected us to win.”

Former Lieutenant Governor Anthony Brown, Hogan’s Democratic opponent, had been predicted to win the 2014 gubernatorial race. However, Hogan ended up winning 20 out of 23 counties, by an average 35 percentage points.

Hogan said they put together a team to run the government agencies and had an economic plan, and knew the kinds of things they wanted to do on a number of issues.

“But no matter how well you plan in life, there are going to be things that hit you from out of the blue,” Hogan said. “And that you’re not prepared for, and that you don’t have a plan for.”

According to Hogan, during the Baltimore unrest, 400 businesses were burned and destroyed in the first few hours, and 170 police and firefighters were injured.

“The city was not able to handle the situation, and we declared a state of emergency, moved our entire team to the city,” Hogan said. “And we helped bring peace and calm.”

Hogan said he walked the streets of the city every day, talked to community leaders, faith-based leaders, gang members, and rioters as well as thanked policemen, firefighters and national guardsmen.

“We were able to restore peace to the city,” Hogan said. “We got credit across the country and the world for the way we handled the situation.”

“Something like that makes you take a look at your life in a different way,” Hogan said. “And I was already focused on trying to help people and trying to do the best I could as governor; but it really made me realize just how short life is. And that you never know how much time you have. So, we better make the most of it – every one of us. And I think every one of us has the chance to accomplish something great every day.”

Students in Vatz’s persuasion class saw Hogan speaking at the University as a good opportunity to hear first-hand of a story about how a politician was able to use persuasion to reach success.

“What [Hogan] talked about was about bettering the state,” said senior Aleksandr Chatskiy. “You can see that he had a goal and it wasn’t just ‘I’m running just to run.’ You can see that he actually wanted to make a difference, which you just don’t see in politics these days – people who actually have a good heart, and good intentions. Which I think is part of persuasion too, because if you’re able to persuade people that you have good intentions, then they’re more likely to vote for you or agree with what you have to say.” 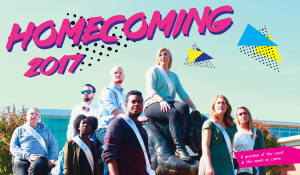 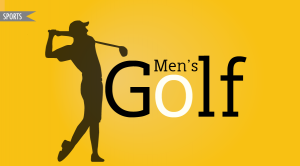